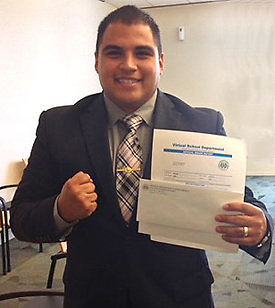 Learning he was not a high school graduate came as something of a shock to Sgt. Juan Deluna. The 27-year-old ex-Marine had just returned from his third tour of duty overseas and was trying to apply for a job with the Houston Police Department when he found out.

“I was under the impression that I was already a 2005 graduate of Jones High School,” he said. “Sadly, I was not.”

Sgt. Deluna only learned of the discrepancy when he tried to obtain a copy of his high school transcript, which is a required part of the application. But instead of a complete transcript confirming his status as a Jones HS alumnus, Sgt. Deluna discovered that he was just shy of the district’s graduation requirements.

Working quickly with Cynthia Nemons in the office of Student Records and Kristin Escamilla from the Virtual School department, Sgt. Deluna came up with a plan to obtain the credits he still needed online before the police department’s application window closed.

“I told him, ‘Look. This is going to be intense. You’re going to have to go into isolation from your family and kids for about a week,’” said Nemons. “But he said he was ready, so we got him set up on the Virtual School system. He worked really hard over three or four days, took his two exams, and received his transcript at 11 a.m., just two hours before the 1 p.m. deadline.”

Sgt. Deluna admitted it was tough. “It was like taking two, 10-week courses in just under a week,” he said. “But the ladies there did an amazing job coming up with a plan to fit my needs. I am very thankful. What they did for me is incredible.”

“This is a testament to the work that our Virtual School department does on a daily basis,” added School Support Services Officer Lupita Hinojosa.