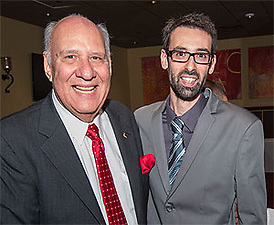 “Science is a process,” he said, “And you can’t expect anybody to give you the answers. Students have to do the experiments and try new things, because that’s what they’re going to need when they’re doing real science.”

It’s precisely that commitment to cultivating students’ own investigative skills that has made Lopez the first-place winner in KBR’s fifth annual science awards program. The contest was created in 2009 to recognize new and effective models of instruction that emphasize the scientific method and critical thinking skills.

Participants are challenged to create engaging lessons about earth and space science, force and motion, physics, and chemistry that are aligned to the state curriculum, using a framework based on the “seven Es”: elicit, engage, explore, explain, elaborate, evaluate, and extend. These seven steps are an integral part of the KBR Science Awards program, which was developed as a partnership between the district’s Secondary Science Curriculum Department and KBR, an international engineering firm headquartered in Houston.

To be considered, nominees must produce a 30-minute video showing a typical lesson from their classrooms. Lopez’s submission chronicled his students’ efforts to build rockets propelled by compressed air as a part of their studies of Newton’s Laws.

“I wasn’t a judge, but I did see all of the videos,” said Dr. Denise Johnson, a laboratory team leader at HISD’s Hollingsworth Science Center. “I think what got the judges excited [about Lopez’s lesson] was that you actually saw what the objective was. There was a strong sense of independent work being done by the students, who used all types of tools to make the right measurements. They also saw students giving actual presentations, testing products out in the field, and having in-depth discussions about why a particular rocket launched successfully, and how to make it better the next time. When they heard that, as well as all the different formulas student had to use to make their calculations, I think that was it.”

“It’s not about data or about facts anymore,” noted Lopez. “It’s about what you do with them. With the internet, students have access to centuries’ worth of information in seconds, so providing those during class is a waste of time. It’s not that I’m teaching, it’s that they are learning.”

As KBR’s Science Teacher of the Year, Lopez won a cash prize of $6,000. Ardelia Ford, a chemistry teacher from Westside High School, received $4,000 as the second-place winner, and Welch MS’s Elizabeth Espino received $2,000 as the third-place winner.

The other finalists this year were: Rebecca Baffour (Welch MS), Donna Dickson-White (Hartman MS), and Alejandra Guzman (Bellaire HS). All were formally recognized during a special awards ceremony held on May 16.