In this edition of I am HISD, which features district students, graduates, employees, and other team members, North Forest High School senior Joseph Vaughns talks about how he landed his own radio show on KCOH 1230 AM, which life struggles he considers a blessing, and what his plans are for after graduation. 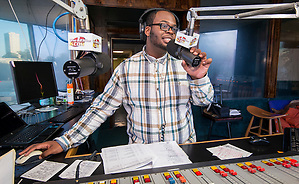 You host the Generation Next program on Saturday mornings at KCOH 1230 AM. How did a high school senior come to be hosting his own public radio show?

I started at the radio station as an intern when I was in the eighth grade. I learned to work the board as a deejay and to produce the Saturday show call “Person to Person” with Lisa Berry-Dockery.

Time went on and the owners of the station changed; they no longer needed me. They told me they would call me if they needed me and eventually, they did. Early one Saturday morning, I received a call asking me to come in to the station because they needed someone in the morning temporarily. I filled in for about two Saturdays and they asked me if I was interested in the position. I’ve been there ever since.

Tell me a bit more about Generation Next. How long have you been hosting that show and when did it first start airing? What is it designed to showcase?

Generation Next has been on the air since May 2013. It’s designed around the music of today. So far, I have been the only host. I play music, present the weather, and discuss current entertainment topics.

I understand you also produce two other shows for KCOH that immediately follow yours on the air. What are their titles and what are they about?

I produce Tre’ Vibration, which is a magazine that discusses the topics of the day. I also produce Kids’ View, which is a talk show for children.

You’ll be graduating from North Forest High School in the spring of 2015. What are your plans for after graduation? Will you pursue a degree or a career in broadcast media?

I will continue my education in the field of Business and Communication.  My plans are to have a double major, but I have not yet decided upon a college, as I am still reviewing my choices.

I hear you already attend Houston Community College and have been inducted into its honor society. When did you start taking classes there and what prompted you to do so? How many hours of credit have you accumulated so far?

Joseph Vaughns hosts his show “Generation Next” at the KCOH studio.

I currently have 12 semester hours with a 3.6 grade point average. I am working on adding to that, as I am currently enrolled in six hours this semester. I started attending HCC when I saw it was an opportunity to acquire college hours while still in high school. I attended the new member orientation for the honor society on Sept. 8.

What other activities are you involved in at NFHS?

I was a member of the marching band and step team for three years, but due to my class load at HCC, I have stopped participating. I also had to stop participating in the student government, as I couldn’t attend the after school meetings. I am in the National Honor Society and the choir at NFHS. When time allows, I work with other band students on some days after school. I am also a deacon-in-training at my church.

The person who told me about you indicated you had overcome some pretty serious obstacles to succeed. What did she mean by that?

My father died when I was in junior high school and my mother has worked two jobs to maintain (our lifestyle). It has been difficult arranging activities around her busy work schedule. Outside of this, my struggles—such as deciding which classes to take at HCC—have really been a blessing.

You work from 5 a.m. until 2 p.m. on Saturdays. That’s a pretty big chunk of time out of your weekend, so how do you manage your other obligations?

I do my homework as soon as possible; I avoid putting it off because of my busy schedule. I study daily to avoid getting behind. I enjoy the long hours at work on Saturday, as I see it as an opportunity and not work. I avoid any homework and school work on Sunday; I dedicate that day to worship and meeting with my minister.