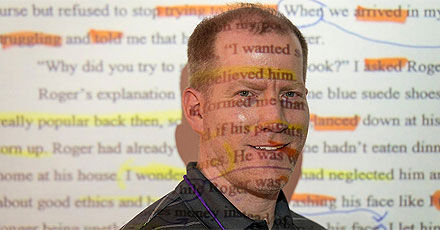 When Mark Dostert was hired as a “children’s attendant” at the Cook County Juvenile Temporary Detention Center back in 1997, he didn’t realize that meant he would actually be serving as an unarmed guard of the facility’s inmates.

But the seventh-grade English language arts teacher, now in his eleventh year at HISD’s Johnston Middle School, said the year-long experience in Chicago taught him some valuable lessons about working with at-risk youth—and now he is sharing those lessons with other educators.

Dostert wrote the book, “Up in Here: Jailing Kids on Chicago’s Other Side” as “a practical illustration of the clash of idealism with reality.” His book was recently named one of the Best Books of 2014 by the Houston Chronicle.

“I think it would be most helpful to new teachers who didn’t grown up ‘at-risk’ but are now beginning to work with at-risk students,” Dostert said. “Cultural differences may arise that present certain challenges to delivering effective classroom instruction. By stepping into my shoes, teachers may not feel as isolated.”

Dostert noted that analyzing and critiquing his students’ writing at Johnston also proved very useful in improving his own writing. “Guiding and redirecting students in their essay drafts, I realized I was often making the same mistakes,” he said. “Teaching writing certainly has helped me learn how to write better faster.”

Dostert’s book was recently named one of the Best Books of 2014 by the Houston Chronicle.