This week marks the end of Autism Awareness Month, so we asked some of our parents of students with autism about their families’ experiences with HISD, to find out what they felt contributed the most to their students’ successes. 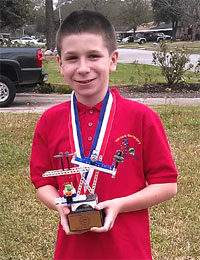 Noah poses with a trophy he won in a robotics competition.

Kristi Anders, the parent of a 12-year-old who is finishing up his last year in elementary school, says her son has flourished at two different campuses due to the inclusive environments created there by caring staff members.

“Noah’s teachers and principal at Garden Oaks Montessori were so accepting and supportive of him,” she said. “He has had to learn his limits and figure out what works for him and what doesn’t, but we bought him noise-reducing headphones and he learned to tell people when they were in his personal space. His teacher would also send him on errands or to get a drink of water when she could see he was getting frustrated. In the third grade, Noah’s friends voted him class president.”

When Noah moved to Harvard Elementary School last year, teacher Joshua Williams’ encouragement helped him blossom even more. “Mr. Williams has created a safe place for his students to be individuals and celebrate both their similarities and their differences,” said Anders. “This year alone, Noah has been given the job of class prosecutor and co-teacher. He has also given several oral presentations, and planned, directed, and hosted the class talent show.” 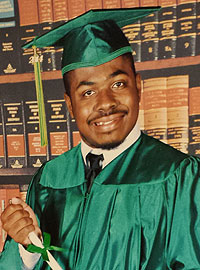 At the secondary level, we spoke with Janeen Crayton, the parent of a 20-year-old who graduated from Worthing High School in 2014. She praised HISD for its transitional program, a partnership with Houston Community College that teaches students with special needs a number of practical skills they can use in obtaining meaningful employment, such as the art of interviewing, how to complete job applications, and the characteristics of good employees.

“Leon gained a lot of confidence through his experiences in HISD,” said Crayton. “He is more independent now and is definitely showing that he is making the transition into adulthood. He just began working at the Houston Zoo in March and he absolutely looks forward to going.”

Both parents noted that while they know challenges still lie ahead, they are very proud of their sons’ accomplishments and grateful for the gentle and thoughtful guidance they have received on their journeys into adulthood.

“My goal has always been to prepare Noah for the real world because I know I won’t always be around to take care of him,” added Anders. “The real world is not going to care if he is ‘special’ or has autism.”

1 thought on “Steady encouragement, support lead to success for HISD students with autism”