Four HISD employees were selected as October’s Employee of the month for Service Excellence and recognized during a special breakfast on Wednesday morning.

Each month, HISD’s Business Operations department hosts the event to celebrate employees from the areas of Transportation, Police, Nutrition Services, Construction and Facilities Services, and Business Assistance who provide exceptional customer service throughout the district. 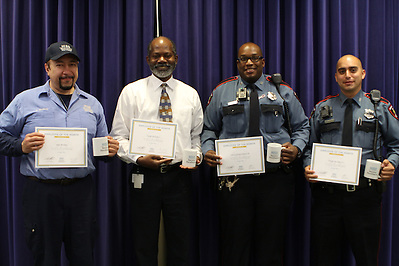 “From the whole Service Excellence team, thank you for what you’re doing,” said HISD Chief of Police Robert Mock, who hosted the event. “You all really exemplify this philosophy. It’s all about our employees being safe, courteous, responsive and efficient – and it goes a long way in what we do every day.”

Nominate HISD’s next Service Excellence Employee of the Month

In addition to the event, any Business Operations’ employee can also be recognized for Service Excellence by receiving a WOW! card for performing above and beyond throughout the district. All of the names of HISD employees who have received a WOW! card will go into a drawing quarterly to have the chance to win Service Excellence prizes.

The following Business Operations’ employees were selected for performing in a safe, courteous, responsive, and efficient manner:

“Mr. Bray brings a positive attitude, professionalism and a great work ethic with him every day,” said HISD Quality Assurance Analyst Kirby Williams. “No matter how tough a situation may become, he maintains the same calm demeanor. His favorite quote to me is, ‘It’s all about the kids.’ Everything he does is for the benefit of HISD students.”

“Omar always has a smile on his face and has a way of making people feel special,” said HISD Nutrition Services Operations Manager Mike Dossat. “When you have an urgent need he goes above and beyond to help you as quickly and efficiently as possible. A great team player and outstanding example of Service Excellence every day.”

Officer Herrera and Officer Wade received information that a student had been struck by a motorist as she attempted to cross the street,” said HISD Police Sgt. AJ Walker. “The timely response and appropriate actions of both officers facilitated the timely response of emergency medical services and other support units. These officers applied the appropriate technical skills to secure the scene and preserve forensic evidence until accident investigation units arrived.”