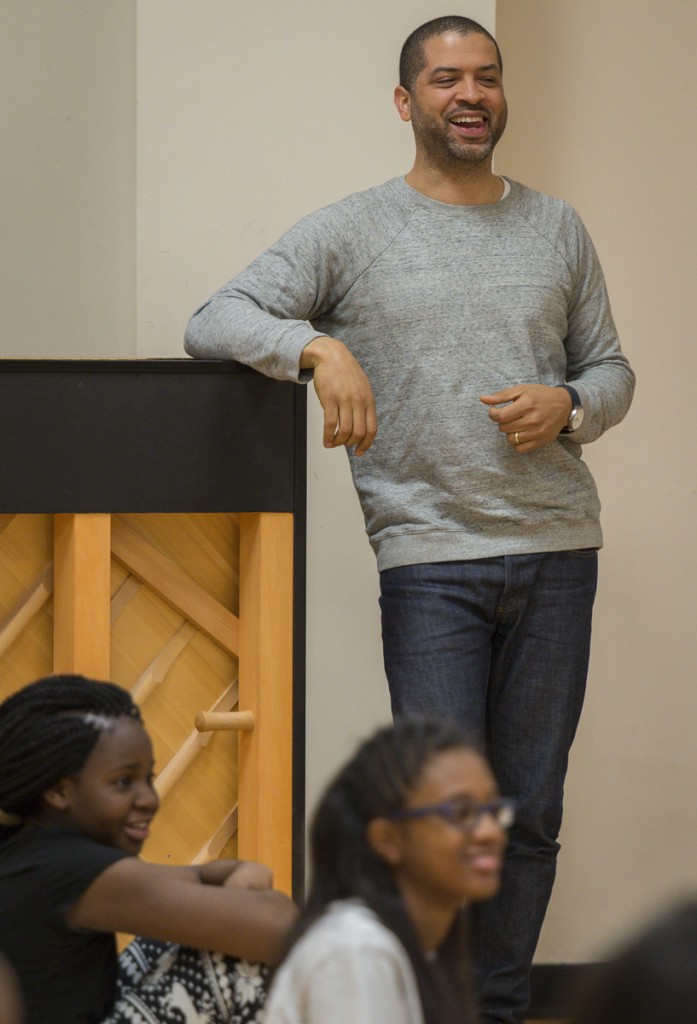 In this week’s I Am HISD, which features district students, graduates, employees, and other team members, HISD alumnus and renowned pianist, composer, and bandleader Jason Moran talks about giving back to the HISD schools he attended and receiving a McArthur “genius” grant. He attended McGregor Elementary School, Gregory Lincoln Education Center, and High School for the Performing and Visual Arts. During a recent visit to Houston to engage with students at all three schools, he took time out from his busy schedule to talk to HISD. For more background information see these links: African-American alumni give back and HISD alumni bringing Black History month to life.

You are in year two of a three-year homecoming residency sponsored by Da Camera with the three schools you attended at HISD. What inspired you to give back to students in those schools?

Many of the thought patterns that I continue to use as a mature artist were learned at those schools. Macgregor Elementary is the place where an instrument was first placed in my hands [a violin], and that prompted my parents to buy a piano for all of us boys to practice on. That piano is still in my living room In New York City, and it’s probably the one I play the most. Though they seem fleeting, these ideas that are planted early on in children’s minds are very important.

What is the driving force behind your interactions with the students?

I know that collaboration is part of your creative process. You said you work with choreographers, writers, and many other types of artists. When did that become such a focus?

A lot of those ideas about collaboration began at HSPVA – just being in a building where visual artists, drama, choir, and orchestra intersect. We had core classes together but then separated into our various disciplines. The conversations were unbelievable. I knew when I got to New York that part of what I was supposed to do as a musician was be aware of what else was happening in the arts, not just jazz and music but the scene as a whole, from theater to literature to film to dance. I set out to find my tribe, the people who think like I do. Having conversations that aren’t always music-centered has made me a more well-rounded human being. It’s important to find other perspectives.

When you were in high school, did you ever imagine a future like the one you are now living?

[Laughs] It’s astonishing. I couldn’t imagine a career like this in high school, let alone at age 6 when I started playing the violin. I didn’t know what a musician does, let alone how to make a living. There’s an international community who believes strongly that art should be around. We have to keep the art machine well-oiled, running, and updated. As a musician, I have learned more about how people work together than I ever did from social studies class. The piano has been my passport into artistic communities around the world – it has taken me everywhere.

You won a McArthur Fellowship, you wrote the musical score for the movie, “Selma,” you are jazz director at the Kennedy Center, and on the faculty of the New England Conservatory. Which recognition has meant the most to you?

Recognition is a byproduct of hard work. If I play a piece of music, and my kids and my wife all like it, I know that I am doing something right. Those recognitions are what give me the confidence to go out and perform. Of course you’re happy when someone appreciates your work. There is a great saxophonist named Benny Golson, and we were playing a slow ballad in a venue in Holland. A ballad is considered the true test of a jazz musician, because you can hear every gap. As I was taking my solo, I saw him watching me, and afterward he said, “You can play all that fast stuff, but when it’s time to play slow, you really know how to play slow.” For a jazz musician, that means you got your stripe.

Your wife, Alicia Hall Moran, is a performer as well. Do you ever collaborate?

My wife is a classical singer and composer, and she has been my partner on every decision I have made. She has been behind the scenes, helping me navigate and giving me her feminist viewpoint. It’s very helpful to have a partner who understands. She is a true inspiration.

Do your young twin sons play the piano?

They are dancers right now, and I’ve seen them inhabit what it is to make movement. They will have to play piano someday, though, because we have a lot of pianos in our house. They are going to inherit them, so they will eventually play.

Maybe one day all four of you will collaborate.

It’s already happened, but there is more to do. Being around kids wakes you up to how artistic decisions are made. It is refreshing when you see where the mind can go in making artistic choices. Children make them with casual amounts of brilliance.

Where your parents musical?

My parents were appreciators. They liked to hear music, and took us to museums, the ballet, the symphony. They wanted us to have arts literacy. I’m the musician, but my two brothers really understand how to look and listen, and how to discuss work, both abstract and concrete. Our parents instilled in us that a diet of the arts is just as important as sports or anything else.