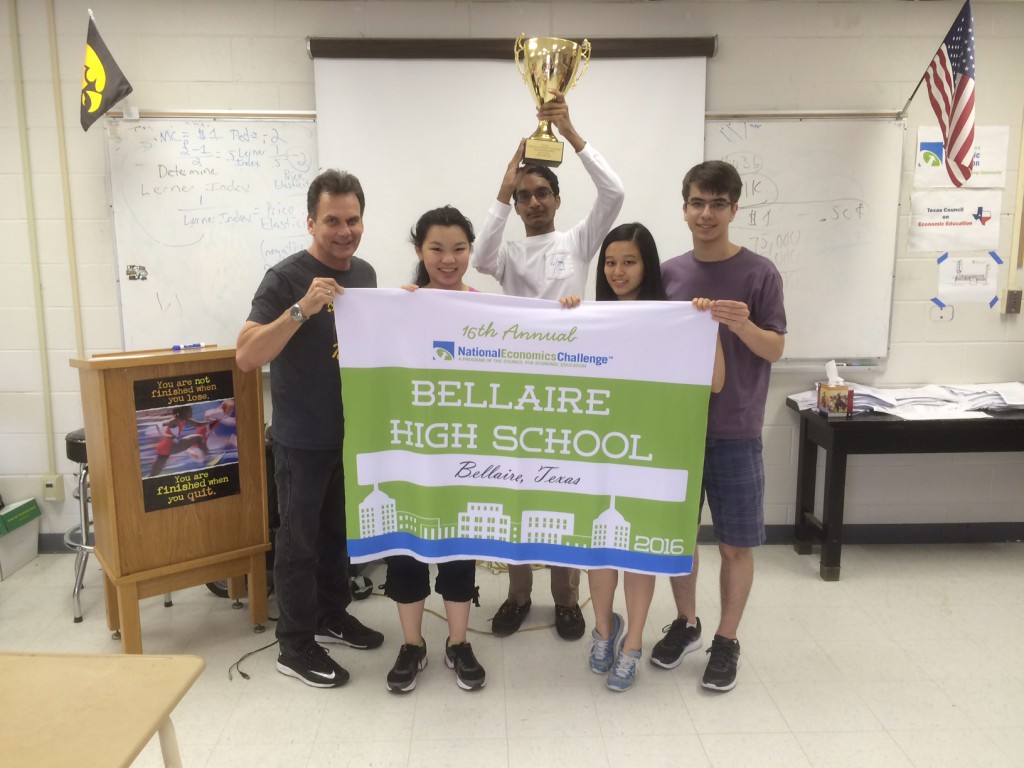 A team of Bellaire High School students successfully put their economic skills and knowledge to the ultimate test to win the top prize at the 16th annual National Economics Challenge held this week in New York City.

Bellaire now has won two of the last three of these challenges in the advanced placement, international baccalaureate and honors students division of the competition. The team was among eight finalist schools to compete in the two-day competition hosted by the Council for Economic Education. The competition began with more than 10,000 students.

The National Economics Challenge applies the excitement of an athletic competition to academic excellence, providing students with the opportunity to apply their economics knowledge and work in teams. The challenge recognizes exceptional high school students for their knowledge of economic principles and their ability to apply problem-solving and critical-thinking skills to real-world events. The finals were held May 22-23, and included written exams and a critical thinking round, culminating in a “quiz-bowl” round held at WNET Studios at Lincoln Center in New York City and co-hosted by CNBC’s Steve Liesman.

“I am very proud of the Bellaire High School economics team for winning this national championship,” said HISD Board of Education Trustee Mike Lunceford, whose trustee district includes the school. “These extraordinary students clearly have the skills and strong work ethic to take them far in life. They are capable of accomplishing great things, and I look forward to seeing their future achievements.”

The four team members who competed in the competition are Amy Fan, Suneal Vemuri, Liana Wang, and Antony Yun. Each of them, along with their coach, social studies teacher Michael Clark, won a $1,000 prize. Clark has led the team for the past 14 years.

“This team was able to beat out many of the best private and public schools in the nation to win the challenge,” Clark said. “What set them apart from the other teams was their work ethic. They practiced more than any other team starting from the first day of school leading up to multiple practices per day. These students wanted this, and they dominated the competition from the first round to the last in a way I have never seen before. I am so proud to have been their teacher.”