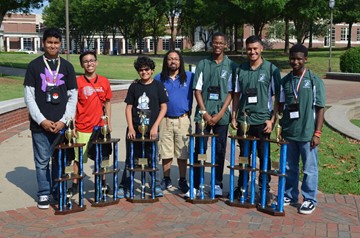 This summer event brings together STEM educators and students for learning, collaboration, and dialog.

SECME stands for Southeastern Consortium for Minorities in Engineering, and VEX comes from the verb “to vex,” which means to confound or confuse. VEX robotics is a high-end robotics platform that requires students to design, build, and program robots to perform complex tasks in highly competitive two-team alliances.

The competition, based on the VEX game “Nothing but Net,” was judged on three factors: head-to-head field competition, a team interview, and an engineering notebook. The Leland teams outpaced 16 robotics teams from across the southeastern U.S.

The club also made its third appearance in a row at the VEX World Championships in partnership with Young Women’s College Preparatory Academy, and won First Tech Challenge Judges Award and participated for the first time in the FIRST Robotics Challenge.  Leland’s sixth-grade robotics teams also won top awards in regional Lego robotics.