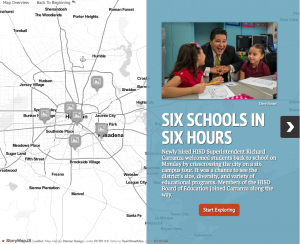 New HISD Superintendent Richard Carranza embarked on a whirlwind tour today of six HISD campuses – which took more than six hours and spanned 60 miles – on the first day of classes in the district.

Carranza’s itinerary covered each geographical area of HISD, and he visited with students, school staff, and community members at each location.

His first stop was at Law Elementary School on the south side, where he had the opportunity to visit a dual language classroom. Next up was Stevenson Middle School to the southeast, where he observed the launch of the district’s Literacy in the Middle program, which aims to improve middle school reading skills. Carranza then traveled to the Third Ward to Yates High School to learn about the school’s communications and maritime magnet programs. The tour then took him to Carnegie Vanguard High School near downtown, which is one of the district’s nationally acclaimed magnet schools. Next up was Wisdom High School (formerly Lee) to the west, HISD’s most diverse comprehensive high school. Carranza wrapped up the tour at Fonwood Early Childhood Center, where he observed pre-K students on their first day in a brand-new building.

The day was full of excitement across the district, including the opening of six brand-new schools under the district’s 2012 bond program. Here are some moments that were being shared on social media: