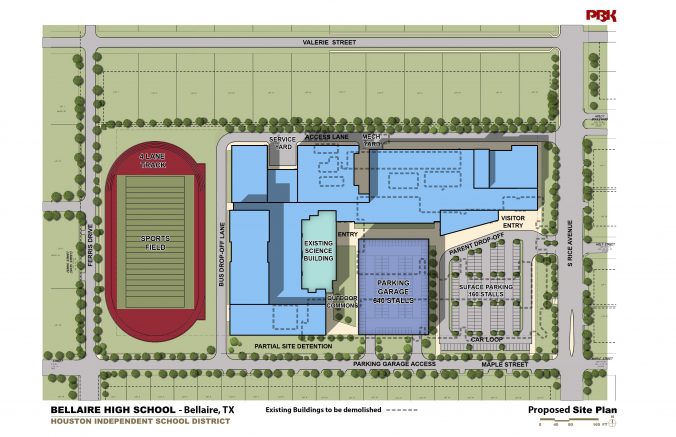 The Bellaire City Council has approved an updated site plan and traffic study for the new Bellaire High School and granted a permit for the property, meaning construction on the facility could begin as early as next summer.

The  approval of the specific-use permit by the city effectively clears the last hurdle in the design process for the new high school, being rebuilt under HISD’s voter-approved 2012 Bond Program.

“After all the work we’ve put into this project to build consensus amongst all of our stakeholders, we are thrilled to finally get the green light from the City of Bellaire and begin moving forward,” Bellaire Principal Michael McDonough said. “This is a huge step forward for our students, our school, and our community.”

Bellaire is among 40 schools, including 29 high schools, being rebuilt as part of the 2012 Bond Program. Updated site plans for the $137 million project allow the district to maximize space on the 18-acre campus by relocating baseball and softball practice fields to a site about two miles away.

The move provides architects with more space to work with and allows them to design a building that better meets the needs of the school and the neighbors, improves traffic flow around the school, and moves all parking onto campus via a garage and surface lot.

Schematic design of the 425,000-square-foot facility is now underway. Construction, which is slated to start next summer, is expected to take about 30 months and will be completed in phases, allowing students to remain on site for the duration. It is expected to wrap up by the end of 2020, with students moving into the new facility in early 2021.

Once the new building is complete, crews will begin demolition of the old building and construction of the parking garage and athletic fields, which is expected to take an additional 12 months. The new athletic fields include practice baseball and softball fields, which are being relocated to 6300 Avenue B in Bellaire, an HISD site previously home to Gordon Elementary and Mandarin Immersion Magnet schools. The City of Bellaire also approved a specific-use permit for this site.

The Avenue B location currently is being used by Kolter Elementary School, which has been temporarily relocated due to flooding from Hurricane Harvey. Project officials said they do not expect the temporary relocation to impact the construction timeline because work is not expected to start at the site until next summer.

A Bellaire community meeting will be held in the coming months to brief school stakeholders on the updated design plans.