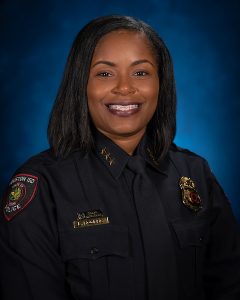 Interim Assistant Police Chief Lucretia Rogers has been selected to serve as the second in command of the Houston Independent School District Police Department.

A former detective, Rogers has been serving as interim assistant chief since February 2018. She permanently assumes the role on May 22.

Rogers was selected by HISD Police Chief Paul Cordova, who also was recently named to his position. Both Cordova and Rogers have been tasked with building a new culture within the police department while also improving the agency’s reputation and strengthening its relationships with the community.

Chief Cordova praised Rogers’ high level of integrity, noting that he had been impressed by the time she spent as interim assistant chief.

“She believes in our mission and vision, and she has proven that she is eager to join me in moving the department forward,” Cordova said. “Her education and background are exactly what we need to push our agency to the next level. It is an honor to call her my partner.”

Rogers was sworn in as an HISD police officer in April 2014 and assigned to Washington High School, where she worked directly with school administrators to ensure a safe learning environment.

After two years, she was promoted to detective with the department’s Investigations Bureau and tasked with heading all investigations involving crimes against children.

Prior to joining HISD, Rogers served as a patrol officer with the Brazos County Sheriff’s Department and as a reserve deputy for Brazos County Precinct 4. Her path to law enforcement was nontraditional. She worked as a correctional health professional after practicing as a nurse — a license she has held for 14 years.

In her new role, Rogers will focus on establishing a Northwest substation to better serve schools in the area, reorganizing the department to make the best use of its resources and budget, and ensuring consistency with industry best practices. She also will help create a districtwide Critical Incident Safety Plan, which includes the formation of an emergency response team.

A College Station native, Rogers holds a bachelor’s degree in Criminal Justice from the University of Houston-Downtown and a master’s degree in criminology from the University of Houston-Clear Lake. She is a licensed vocational nurse, holds an advanced peace officer certification, and is one of just a few HISD police officers certified in sexual assault and family violence.

“My law enforcement education further taught me the value of holding someone’s life in your hands,” Rogers said. “It taught me about having integrity while having power and authority in this field, and that is the foundation I will always lead my career by.”