Eight schools are participating in this weekend’s parade

Students at the Billy Reagan K-8 Education Center are putting the finishing touches on an after school art project that will soon be seen by thousands of Houstonians. Art teacher Carolyn James-Taylor and a group of middle school students have created an entry for this year’s Art Car parade which will be cruising down Houston’s streets on Saturday, May 11, 2013, starting at 3 p.m. END_OF_DOCUMENT_TOKEN_TO_BE_REPLACED 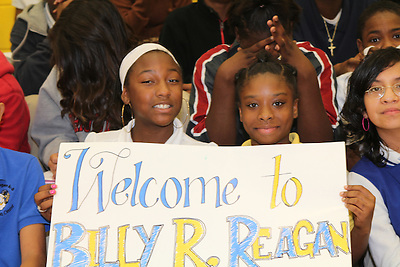 Click the photo above to see photos from the event

Houston Texans football player Kareem Jackson visited students this week at Billy Reagan K-8 Educational Center to motivate them to stay in school and to work hard to get good grades. Jackson spoke to the sixth- through eighth-grade students at a pep rally.

During his talk, he stressed the importance of being good students and encouraged them to always listen to their parents and teachers. He reminded them that the choices they make now will affect them later in life.

END_OF_DOCUMENT_TOKEN_TO_BE_REPLACED

HISD’s new Billy Reagan K-8 Education Center, scheduled to open this Fall, will offer a two-way dual language program to its kindergarten class in an effort to develop full bilingualism and bi-literacy for all students.

The Billy Reagan K-8 Education Center has been designed to be a learning, innovative environment that will address the global marketplace and the need for a multilingual workforce in the 21st century.

The center will implement this program in one of the kindergarten classes during the 2012-2013 academic year and add one grade per year until there is a complete two-way dual language program in grades K-8.

Many of the schools offering the two-way dual language program are still accepting applications for the 2012-2013 academic year.  For more information, contact the Multilingual Department at 713-556-6961.