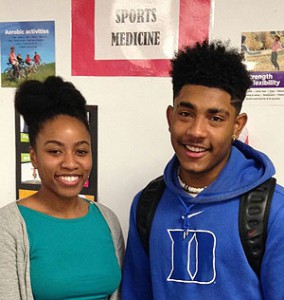 For Licensed Athletic Trainer (LAT) Stephanie Polydore, one of the most gratifying aspects of her job is helping injured student athletes get back on track—both literally and figuratively.

“I love helping athletes get back to their full ability to compete in their sport,” said Polydore, who also teaches a sports medicine class at Waltrip High School.

The former stadium-based LAT is now one of only two campus-based LATS in HISD (the other is at Chávez HS). And while Polydore wasn’t able to salvage the football season for senior Xavier Smith, who broke his leg during the very first scrimmage of the season, thanks to the rehab he completed under her supervision, “he says he feels stronger now than he did before he was injured. He’s actually going to run track this spring.”

Another benefit of Polydore’s current position is the ability to get to know students better. “It’s more of a relationship now,” she said. “I get to see the beginning phase of rehabilitation all the way through to the end. And when I see athletes progress through the whole process and see how much they have accomplished, that just makes me love my job even more.”

Polydore is now recruiting Waltrip students who want to serve as sports medicine interns for the 2015–2016 school year. For details, please contact her directly at 713-688-1381.