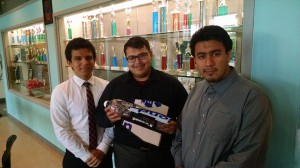 The team’s winning design was based on several years of testing and development. Contest entries must follow a rigid set of guidelines, which include the absence of metal parts, a rounded nose cone, maximum fin span, and overall length.

The rocket entries are tested under the same air pressure and timed from lift-off to landing. The majority of entries in this event do well to exceed three to four seconds of flight duration. In testing, the Falcon 1 team’s rocket consistently exceeded 10 seconds. The results and scores are submitted to SECME office and judged against all the other regions to determine the final national placing.

“This particular team has won numerous awards and recognitions from the local and regional to state and national levels of competition. We are very proud of them,” said EECHS teacher Sam Saenz. “They will be missed upon graduation; however, they will leave a long-lasting legacy for our underclassmen to emulate.”

Saenz, the 2015 SECME Teacher of the Year, and Vladimir Lopez are club advisors.