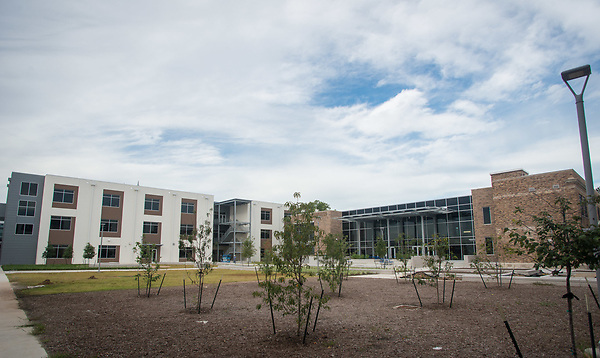 Milby High School is one of two schools selected to receive the prestigious 2018-2019 Caudill Award, the highest honor presented in the statewide Exhibit of School Architecture.

“Milby is a sophisticated, artfully designed project that beautifully melds a historic 1926 structure with a modern 21st century facility,” HISD’s General Manager of Facilities Design Dan Bankhead said. “The building incorporates innovative state-of-the-art features that will meet the changing educational needs of the school and community for many years to come.”

Designed by Kirksey Architecture, Milby is among 40 schools across the district selected to be renovated or rebuilt as part of HISD’s voter-approved 2012 Bond Program.
The three-story, $79 million facility is a combination of new construction and renovation that preserved the historic 1926 front facade while creating a modern learning environment for 2,000 students.

The original building was transformed into a bright, open, student-union-style space with a dining commons, flexible learning areas, and floor-to-ceiling windows looking out onto a large central courtyard.

Flanking the original building are modern academic wings that feature 21st century learning spaces for science and engineering labs, welding, cosmetology, printing, and culinary arts. Other features include a new main entrance, administrative offices, and auditorium with a black box theater, as well as a new gym, dance room, and locker rooms.

The award, which is named after late William Wayne Caudill, a celebrated Texas architect known for his progressive concepts in school design, will be presented at the association’s Midwinter Conference in Austin Jan. 28.

Follow @Build_HISD on Twitter for the latest updates on the 2012 Bond Program and school construction across the district.