Fifty-five seniors from seven Houston Independent School District high schools have qualified as finalists in the 61st annual National Merit Scholarship Program and will now vie for more than $32 million in college scholarships.

The students are among about 15,000 from across the country to advance to the finalist level, allowing them the opportunity to continue in the academic competition. END_OF_DOCUMENT_TOKEN_TO_BE_REPLACED

The HISD students are among 16,000 from across the country to earn the semifinalist designation, allowing them the opportunity to continue in the academic competition and vie for more than $32 million in scholarships that will be awarded in the spring.

Six more Houston Independent School District students were selected this week to win National Merit scholarships financed by U.S. colleges and universities, bringing the total number of HISD winners up to 23 this year.

Three lucky HISD students got to see their names in lights on June 10, when hundreds of students from across the country were featured on a Times Square billboard in New York City.

END_OF_DOCUMENT_TOKEN_TO_BE_REPLACED

Seven Houston Independent School District students from four schools are among more than 2,200 high school seniors from across the country to be selected this week to win National Merit Scholarships financed by U.S. colleges and universities.

END_OF_DOCUMENT_TOKEN_TO_BE_REPLACED

Carnegie Vanguard High School senior Tre’shunda James was surprised on Friday, April 24, at a schoolwide pep rally, where she was awarded a $20,000 scholar-athlete scholarship from Footlocker. James was also selected for the District 20-6A All-district Volleyball First Team.

END_OF_DOCUMENT_TOKEN_TO_BE_REPLACED

Two Houston Independent School District students are among more than 1,000 high school seniors from across the country to be selected this week to win a corporate-sponsored National Merit Scholarship.

Both students are in the first group of 2015 winners to be announced as part of the 60th annual National Merit Scholarship Program, which rewards academically talented U.S. high school students who score well on the PSAT with free money for college. The students’ scholarship awards are renewable for up to four years of college undergraduate study.

The corporate-sponsored National Merit Scholarship awards are financed by about 200 corporations, company foundations, and other business organizations. Scholarship winners must either plan to pursue a degree or career in the company’s industry, be a child of company employee, or be a resident of a community the company serves.

Additional recipients of other National Merit scholarships will be announced in May followed by the announcement of winners of college-sponsored Merit Scholarship awards. In September, 56 HISD students were named National Merit semifinalists.

A group of students from Carnegie Vanguard High School’s Interact Club teamed up with the Houston Independent School District Police Department for its annual holiday Toy Drive on Thursday. 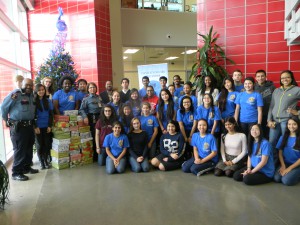 For the second year in a row, the club collected boxes and gave from their own personal pockets to create about 30 gift boxes filled with items such as T-shirts, shorts, soap, pencils and other items for boys and girls.

In a written memo to the Interact Club, HISD Chief of Police Robert Mock thanked the student organization for their kindness.

“You have certainly set a fine example of defining your mission through your thoughts and actions,” Mock said. “Not only did your organization donate gifts for less fortunate children, but you went the extra mile of wrapping the presents and labeling the boxes for easy distribution.”

The mission of the Interact Club aims to show students how to overcome obstacles, such as distance and cultural barriers, while learning to embrace other kids like themselves around the world.

Dewey was nominated for the award by his former CVHS student, Brookelynn Russey, who will graduate from Texas A&M on Friday, Dec. 19. He will be presented the award during the commencement ceremony. END_OF_DOCUMENT_TOKEN_TO_BE_REPLACED