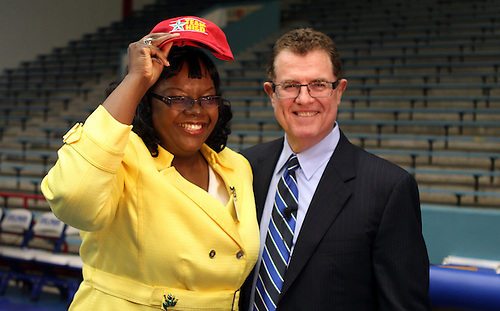 Tonya Woods of Lewis Elementary, pictured with Houston ISD superintendent Terry Grier, is one of the district's Principals of the Year.

The administrators were nominated by colleagues, teachers, and students for their instructional leadership and efforts to boost student achievement, and the honorees were selected for their outstanding contributions to the district and their school communities.

Here are the 2013 honorees:
Assistant Principals of the Year 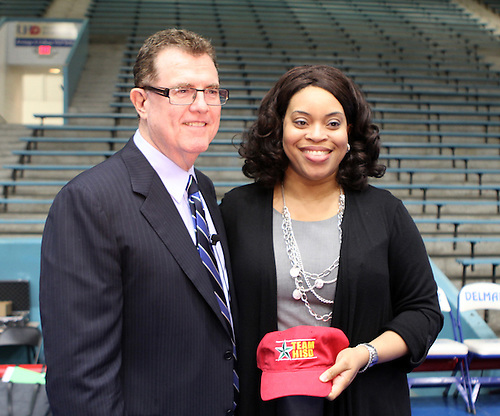 Sonja Williams of Madison High School, pictured with Houston ISD superintendent Terry Grier, is one of the district's Principals of the Year.

First Year Principals of the Year

Principals of the Year

See photos of all the Principal of the Year winners. 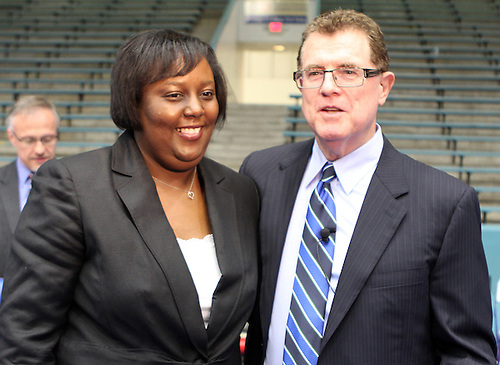 Nicole Moore of Key Middle School, pictured with Houston ISD superintendent Terry Grier, is one of the district's Principals of the Year.

Superintendent of Schools Terry B. Grier congratulated the administrators during a ceremony at the monthly principals’ meeting. “There’s no doubt that these administrators represent excellence in leadership,” he said. “But there are many other equally deserving principals in this room.”

Judd M. Lewis Elementary was the scene of a small gathering Monday morning to officially cut the ribbon on a new school that has been serving more than 900 students daily for nearly a year.

A handful of teachers, students, Houston ISD staff and dignitaries heard about the history of the school and its namesake, and a few of the more important features of the school built with funds from the 2007 bond program.

Those who were in the school’s new library could only see a few of the major additions to the new two-story Lewis Elementary.

Technology and its assistance in classroom instruction were one of the key features of the new school, said principal Tonya Woods.

“This library!” said Woods. “The reading, the opportunities; we have thousands of resources just in the library alone. We have three mobile labs where (the students) can check out the computers in the classroom.

“We’re technology rich,” she said. “Everything is identical, giving the students the understanding that ‘you’re important,’… your learning is important to us and we value you.”

In addition to the upgraded technology, the school features multiple science and computer labs, as well as both a music and art lab. The school also includes a stage with a training room for drama students.

“The previous school looked nothing like this one, and as one of the young students here today said, it was the nicest building he’s ever been in,” said HISD Board of Education member Manuel Rodriguez Jr.

Rodriguez Jr. used the occasion to mention how the new school was built after voters approved a bond program in 2007. He also talked about how others, including nearby Austin and Milby high schools, would benefit should the electorate choose to support a $1.89 billion bond program on the November ballot.

“We need to have the type of schools that bring and attract new people and new firms to our area to be able to have a quality education for those children coming in, and for our own, because we will have leaders coming out of these schools,” he said. “I never expected to be on the school board when I was in high school, and here I am.”

As you approach the new school on Houston’s southeast side, you expect to see the features of a new school, but it’s some of the subtle touches that stand out first.

Pillars of baby blue hold up wavy, red colored walkways in front of a brick facade. There are multiple bike racks across the campus perimeter to encourage its student population — many of whom live less than a mile from campus — to walk or bike to school, and there’s a large covered play area off to the side.

Even still, you expect touches like that in a new school. It’s the inside of the year-old school that stands out. As you walk in, you’re greeted with a giant mural of a lion resting among a floral garden. The mural, produced by Houston artist Dixie Friend Gay, covers a 14’ by 14’ wall above the second set of double-doors to the school.

The new campus replaced one built in 1958 and named for the first poet laureate of Texas.