HISD’s Student Congress, in partnership with Rice University, will be conducting a TEDxHISD conference on April 9, 2016, and leaders of that organization are still seeking both volunteers and speakers.

TEDx are independently organized events designed to bring people together to share great ideas. The TEDxHISD event will take place from noon until 6 p.m. in the Anderson Bio Lab Lecture Hall 131 at Rice University (6100 Main Street, 77005). It is open to all HISD high-school students.

END_OF_DOCUMENT_TOKEN_TO_BE_REPLACED 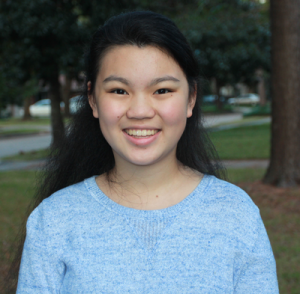 In this week’s “I Am HISD,” which features district students, graduates, employees, volunteers, and other team members, Bellaire High School senior Amy Fan talks about why she got involved in the HISD Student Congress, what her goals are for this school year, and the biggest hurdle she had to get over in embracing her role as speaker of the congress.

You served as the outreach chair of the Student Congress during its inaugural year of operation. What made you decide to throw your hat in the ring for the top leadership position?

You make me sound like a politician. Actually, I’ve been really interested in education reform for a while, even before the Student Congress was founded (mostly just through reading and watching videos), and I’ve come to embrace its mission. And after being part of the Student Congress Cabinet in its founding year, I learned a lot more about the district, both from a student perspective and an adult perspective, and it seemed logical to run for speaker my senior year. END_OF_DOCUMENT_TOKEN_TO_BE_REPLACED 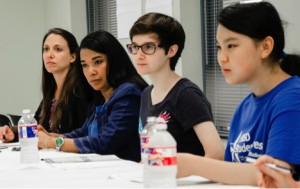 In May, the Student Congress lobbied Nutrition Services to make food donations to Second Servings, an organization that collects and donates leftover food. While Nutrition Services is unable to donate school lunches, it did find a way to make donations through its catering kitchen operations, and the district recently signed a charter to donate leftover food. END_OF_DOCUMENT_TOKEN_TO_BE_REPLACED 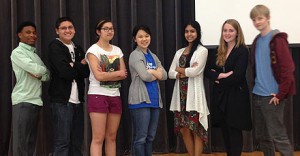 Carnegie Vanguard High School student Zaakir Tameez will soon be handing over his gavel to a new leader. The graduating senior, who cofounded HISD’s new Student Congress last year, will be yielding his position as speaker of the congress to Amy Fan, a junior at Bellaire High School, after graduation this spring.

An election for new Student Congress cabinet members took place on March 28 at the Gregory Lincoln Education Center, and the new officers will assume their duties as of May 28.

“It’s been my effort from day one to create something that would last well beyond me,” said Tameez. “Today was a giant step in that direction.”

Below is a list of the new leaders-elect (pictured, L-R, above):

“Our election is a testament to our motto: student-run, student-led,” said new Speaker of the Congress Amy Fan. “Now that we have a strong base of members and the foundation is set, we’re ready to accomplish even more. I’m really looking forward to next year.” 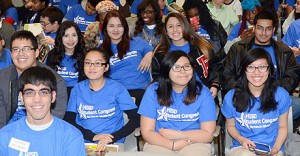 Speaker of the Congress Zaakir Tameez (lower left) poses with members of the Student Congress at the Dec. 11 Board of Education meeting.

A group of juniors and seniors from four HISD campuses is on a mission to give their peers a voice in public education—and they have created a new Student Congress to do it.

“We were originally called ‘Our Shared Future’ and talked about current events,” explains Outreach Chair Amy Fan, now a junior at Bellaire High School. “But as we met with city leaders from all over Houston, our conversations would constantly lead back to education. Yet the only people with whom we could share our critiques was each other.” END_OF_DOCUMENT_TOKEN_TO_BE_REPLACED