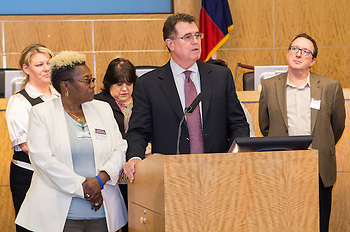 Houston ISD Superintendent Terry Grier and local and state leaders from the American Federation of Teachers (AFT) joined forces on Monday, Feb. 9, to challenge school districts across the Houston area to join HISD in implementing a policy that formally bans workplace bullying.

In August 2014, the HISD Board of Education officially adopted a workplace policy that takes a strong stand against bullying. In fact, HISD was the first school district in the U.S. to adopt an anti-bullying policy for employees, which was the result of a collaboration between HISD, AFT, and Wretha Thomas, head of Houston Area Educators Against Workplace Bullying and president of Houston Education Support Personnel (HESP). HESP members are taking the lead on training and educating employees on the policy.

“The district considers workplace bullying to be unacceptable and will not tolerate it under any circumstances,” said HISD Superintendent Terry Grier.

Also speaking at the event were Texas AFT President Louis Malfaro, Thomas, and representatives from other local school districts.

“In the greater Houston area, we want to reclaim the promise of public education and provide safe and welcoming schools for all school employees,” said Malfaro. “AFT members throughout Houston have formed a coalition to work on this issue.”