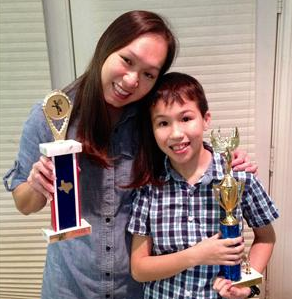 Lovett ES fifth-grader Bryan Moore poses with his mother, Tonyamas Moore, who won the spelling bee at that campus back in 1986.

Five boys and five girls from 10 different HISD schools will be testing the limits of their vocabulary on Saturday, April 2, when they take part in the finals of the Houston Public Media spelling bee. The top two winners of the Houston-area competition will be eligible to advance to the Scripps National Spelling Bee near Washington, D.C., in May.

Bryan will be following in his mother’s footsteps, as she won the campus spelling bee when she was a student at Lovett back in 1986. But Christine’s family also has a tradition of excellence; she and/or her sister Toby have participated in seven of the last eight years of the Houston Public Media bee, and both consistently placed in the top half of the competition. For her part, Christine has tied for 23rd place (2015), tenth place (2014), and 16th place (2013). Her sister Toby tied for third place (2011), seventh place (2010), and 13th place (2009).

For those wishing to tune in, the finals will be streamed live on the Houston Public Media website starting at 2 p.m. on Saturday, April 2.