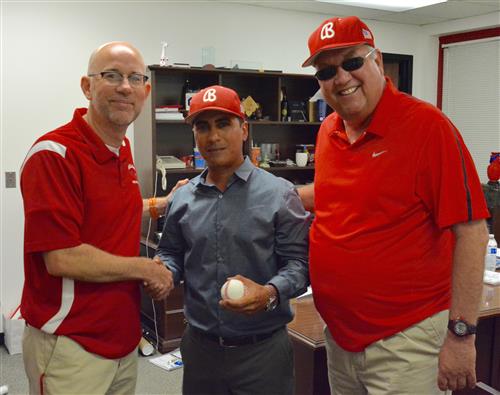 Manuel led the Bellaire baseball team for 25 years. The team went to the state championship tournament three times, while winning the state championship in 1994 and 1999. In 1999, USA Today named Manuel as National Coach of the Year and the Bellaire team was recognized as national champions. Under Manuel’s leadership, over 200 Bellaire baseball players graduated and moved on to play Division I baseball at colleges and universities throughout the country. Seven of those former players continued on to play professionally at the major league level.

“Any success I had at Bellaire could never have been achieved without the tireless and enthusiastic support of the parents in this program as well as the school administration,” Manuel said.

Prior to coaching baseball at Bellaire, Manuel served as the head baseball coach at Northside (formerly Davis), Lamar and Milby high schools.  His 35 total years of coaching within the district, coupled with his 998 wins on the field, are the most of any baseball coach in HISD. Manuel has also led teams to the state playoffs 26 times.

“Rocky Manuel has been the face and the energy of Bellaire baseball for a quarter-century,” said Bellaire Principal Michael McDonough.  “His commitment to the student-athletes, their families, and our entire school community cannot be questioned.”

The team’s assistant coach, Nick Ozuna, was selected to lead the team as the new head coach. Ozuna has strong ties to the Bellaire community. He was a member of Bellaire’s 1994 state championship team and later went on to play four years of college baseball at Sam Houston State University and Houston Baptist University. Ozuna returned to Bellaire as an assistant coach in 2005 after coaching at Westbury High School for a year.

“Bellaire is known for a lot of great things, with academics being the common denominator,” Ozuna said. “However the Baseball program has often been synonymous with Bellaire High School, and I’m proud and privileged that Mr. McDonough has given me this opportunity. I’m also proud that Coach Manuel had the confidence in me to recommend me as the next head baseball coach.”