As the 2020-2021 school year draws to a close, several Houston Independent School District seniors were awarded scholarships on Tuesday.

END_OF_DOCUMENT_TOKEN_TO_BE_REPLACED

Following a purple carpeted path, students, staff, and community members walked through an inflatable Panther tunnel, that led to a dining commons area decorated with purple and silver balloons in celebration of the Northside High School grand opening ceremony.

“This campus not only allows us to clearly express ourselves, but it inspires us to be more creative,” Northside Senior Jacquelin Ricalday said. “It’s great for current students, future students, and our community overall.”

END_OF_DOCUMENT_TOKEN_TO_BE_REPLACED

Northside High School students steadily filed into the commons on Monday and lined up behind a bank of white tables, eager to pick up schedules, find friends, and get a first glimpse of the new campus.

Standing just behind the tables was Assistant Principal Victor Okoli, armed with a floor plan and ready to help students navigate the new facility.

Principal Cecilia Gonzales stood just a few feet away, watching over the process, welcoming students back to school, and guiding them through new, brightly colored hallways.

END_OF_DOCUMENT_TOKEN_TO_BE_REPLACED

Almost seven years after Houston voters approved a $1.89 billion bond to replace and repair 40 schools across the district, including 29 high schools, the 2012 Bond Program is coming to a close.

Only four schools remain under active construction as part of their original scope of work – Northside, Lamar, Austin, and Bellaire high schools.

END_OF_DOCUMENT_TOKEN_TO_BE_REPLACED

With a slated opening for the 2019-2020 school year, construction on Northside High School is now 90 percent complete.

The school’s science and art rooms and bus canopy are complete. Interior finishes in the performance arts wing, first floor classroom renovations, landscaping, and parking are nearly complete. In addition, stairwell upgrades in the historic building are underway.

The $66 million project is part of the voter-approved 2012 Bond program and calls for two new additions along with renovations to the original building, built in 1928.

END_OF_DOCUMENT_TOKEN_TO_BE_REPLACED

HISD Bond Oversight Committee members toured the new Wharton Dual Language Academy during their quarterly meeting Tuesday, getting an inside look at the building that opened its doors to students just four months ago.

Wharton Principal Jennifer Day and HISD Construction Services Senior Manager Meredith Smith led the group around the colorful building, making stops in classrooms, science and computer labs, and art and music rooms, as well as the cafeteria, gym, and library.

END_OF_DOCUMENT_TOKEN_TO_BE_REPLACED

Northside High School is nearing the end of its fifth and final construction phase, which will bring the project to completion by the third quarter of 2019.

Demolition on a portion of the existing building was recently completed, making way for the new performing arts addition. Foundation work has already begun and walls are going up.

“We are looking forward to having our new building and renovations finished this year,” Northside Principal Cecilia Gonzales said. “Although we’ve been able to move in our new spaces as they were being built, we are excited about having a fully completed school.”

END_OF_DOCUMENT_TOKEN_TO_BE_REPLACED 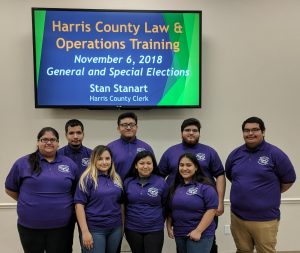 Students from Northside High School presented their 2018 Together with Tech Project at the Harris County Clerk’s office.

The students received nearly $20,000 after submitting a formal funding request to build upon the projects they presented at this past year’s Together with Tech Student Conference, which was held in April.

Although the groups did not place at the conference, they received valuable feedback, and the panel of judges encouraged them to continue with their work.  But that would take funding.  END_OF_DOCUMENT_TOKEN_TO_BE_REPLACED

The new culinary classrooms are part of a $66 million, multi-phase renovation project taking place at the school as part of HISD’s voter-approved 2012 Bond Program. The Northside project is two-thirds complete.
END_OF_DOCUMENT_TOKEN_TO_BE_REPLACED

Northside senior Sofia Flores got a big surprise in class Tuesday morning when she was named the first-ever recipient of the HISD Superintendent and Board of Education Scholar Awards.

The scholarships, which will be distributed to one senior at every high school through next week, recognizes students who have exemplified great character and resilience.

HISD Interim Superintendent Grenita Lathan, with District I Trustee Elizabeth Santos, had the honor of presenting Sofia with an oversized $5,000 check. Lathan highlighted the importance of the scholarships and helping students who had overcome significant obstacles to pursue their dream of going to college.

“We want to help them in their endeavors as they embark on the next leg of their journey,” she said.

Sofia has flourished in her studies despite losing her younger brother, Josue Flores, who was killed as he was walking home from his school. Just days ago marked the two-year anniversary of his murder, which remains unsolved.

Sofia was her younger brother’s personal tutor, guiding him to academic success and nurturing his love of math and science. It was in her interactions with him that inspired her to go to the University of Texas and study education. She hopes to one day return to HISD as a teacher.

“I am actually honored to get this scholarship,” Sofia said. “Helping him inspired me to be a teacher, and everything I do, I do for him.”