HISD Board of Education, HISD Superintendent, administrators, teachers and students to partake in the district’s celebration

What:             Hundreds of school administrators, teachers and students will join the HISD

Board of Education and Superintendent Terry Grier as the district celebrates winning the Broad Prize for Urban Education. The prestigious award recognizes the public school system that has demonstrated the greatest overall performance and improvement in student achievement while reducing achievement gaps among poor and minority students. The award also provides the HISD class of 2014 with $550,000 in college scholarships. HISD won the first Broad Prize awarded in 2002 and was also a finalist in 2012.

The celebration at the district’s headquarters will feature school marching bands, cheerleaders, community members and HISD’s #GreatAllOver school bus, among other festivities.

For more information about The Broad Prize, including video and photos, please visit www.houstonisd.org/broadprize.

The Houston Independent School District will offer summer school instruction for students in the North Forest community from July 8 through Aug. 1.
END_OF_DOCUMENT_TOKEN_TO_BE_REPLACED 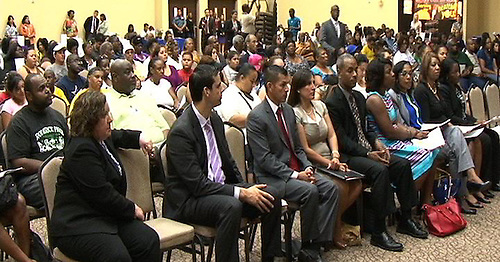 Hundreds of parents and students gathered on Tues., June 25, to learn more information about the scheduled annexation of North Forest schools into the Houston Independent School District. The Texas Education Commissioner has ordered HISD to annex North Forest ISD on July 1. To make the transition as smooth as possible, HISD is holding a series of community meetings. The final meeting will be held on Thurs., June 27, from 6:30 to 7:30 p.m. at the Eden Event Center, 7540 N. Wayside.

END_OF_DOCUMENT_TOKEN_TO_BE_REPLACED

Because of the overwhelming response and interest in teaching positions for the 2013-14 school year, we have decided to extend our spring application deadline to May 22, 2013.

If you are passionate about teaching and committed to boldly impacting student achievement, we urge you to apply for a teaching position with HISD. To get started, simply click here and follow all instructions.

While vacancies exist in all areas, HISD has a high need for instructors with strong backgrounds in the following areas:

Five-thousand dollar incentives are available, while they last, for teachers hired for the 2013-2014 school year to teach in critical shortage areas including: bilingual (Spanish), Spanish, secondary math, secondary science, and special education areas such as autism, life skills, Preschool Program for Children with Disabilities, DeafEd, and behavior support. 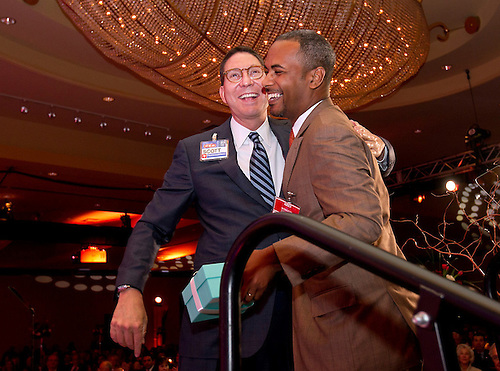 Three HISD educators won top honors at the HEB Excellence Awards on May 3, 2013, and brought home a combined total of $75,000 for their schools.

Mike Walker, the principal at Fondren Elementary, received top honors in the elementary principal category. He received a $10,000 prize and a $25,000 grant for his school.

High School for the Visual and Performing Arts Principal R. Scott Allen was also awarded a $10,000 cash prize and a $25,000 grant for his school. “Winning this award speaks volumes to the importance of combining arts with a rigorous education to create well-rounded, successful students,” said Dr. Allen. He plans to use the $25,000 grant to create a yearly scholarship for an at-risk student on his campus.

END_OF_DOCUMENT_TOKEN_TO_BE_REPLACED

More than 200 experienced teachers from across the nation lined up Saturday to learn about HISD  job opportunities at an informational session and job fair Saturday at Hattie Mae White Educational Support Center.

END_OF_DOCUMENT_TOKEN_TO_BE_REPLACED

Houston ISD teachers have the opportunity to enhance their skills with lesson plans designed with the help of educators in the district.

END_OF_DOCUMENT_TOKEN_TO_BE_REPLACED

HISD is now recruiting highly-qualified teachers for the 2013-14 school year to help us fulfill our mission of providing each and every one of our students with an excellent education.  Candidates are strongly encouraged to apply online here by the Early Bird application date of January 14, 2013, to have the best chance of securing an early contract for the 2013-14 school year.    END_OF_DOCUMENT_TOKEN_TO_BE_REPLACED

HISD currently has hundreds of openings for motivated teachers who are invested in making an impact on student achievement. Candidates who submit an application by August 13 will be eligible to start teaching in the fall.

While vacancies caused by voluntary resignations and retirements exist in all areas, the highest need for teachers exists in critical shortage areas, including bilingual (Spanish), Spanish, secondary math, secondary science, and special education areas such as Autism, Life skills, Preschool Program for Children with Disabilities, DeafEd, and Behavior Support.

Teachers in HISD are committed to holding themselves to high expectations, and they believe without a doubt that every child can learn. These sentiments are shared by HISD 2011-12 Teacher of the Year honoree Ashley Monteil.  “HISD is a district willing to implement innovative programs to affect student outcomes in a positive way,” said Monteil, who teaches second-grade and fourth-grade students at Lyons Elementary school.  We set high expectations at HISD and we’re concerned with the success of every single student.  It’s an exciting time for education right now, in Houston and nationally.  If you are passionate about opening doors to kids, I couldn’t think of a greater opportunity.”

The annual teacher salary at HISD begins at $44,987, and salary offers depend on educational credentials and prior work experience.  HISD offers a comprehensive benefits package to teachers, including medical, dental, vision, disability, and life insurance, flexible spending account options, and vacation time.

By filling out one application, applicants gain access to a network of nearly 300 diverse schools looking for qualified, experienced teachers.  Candidates must have a Bachelor’s degree, hold valid Texas teaching certification (or reciprocal out-of-state certification), and pass a background check. We are committed to diversity in our hiring and employment practices and encourage all qualified candidates to apply.

We believe that an effective teacher in every HISD classroom is our city’s best chance for a bright future. To apply to teach with HISD, please visit HISD’s Teacher Recruitment page by clicking here.

All Houston ISD teachers will receive 2-percent pay raises under the district’s 2012-2013 budget that includes pay increases for all staff without increasing the property tax rate.

In September, all Houston ISD employees will receive pay increases ranging from 1.75 percent to 2.25 percent under the budget approved on Thursday.

HISD’s non-teaching staff last received a pay raise in 2009-2010, and some, but not all, teachers received a raise in 2010-2011. No employees received raises during the 2011-2012 school year. Dr. Grier said the pay increases are necessary to remain competitive with surrounding Houston-area school districts that have already proposed doing so.

All teachers will receive a 2 percent pay raise.

Other employee groups will receive the following salary increases:

Employees with questions about the new salary schedules may submit them via email to compensationdept@houstonisd.org.

The $1.58 billion budget addresses the loss of $47.1 million in state funding with $8.9 million from the district’s savings account, which currently stands at about $257 million.

The Texas Legislature’s decision to cut public education funding by $5.4 billion statewide cost HISD schools $125.1 million over a two-year period. Because of these cuts, the state now pays 21 percent of HISD’s budget, compared to 26 percent a year ago. The amount of HISD’s revenue that comes from local tax dollars now totals 79 percent.

About $17 million of the shortfall caused by the cut in state funding will be covered by reducing the amount of general fund money that is normally transferred to HISD’s debt service fund to help repay loans at a faster rate than is required. This reduction is a one-time option that will not be available in future years.

HISD has also identified several areas of decreased spending for the upcoming school year. These include:

Although the board will not adopt a property tax rate until later this year, Superintendent Terry Grier intends to recommend that HISD maintain the current tax rate, which is the lowest of any school district in Harris County. Last week, the Board of Education agreed to continue granting an optional 20 percent homestead exemption in addition to the standard $15,000 exemption that homeowners across the state receive.