HISD’s Transportation Department is offering a $2,000 sign-on stipend to the first 120 CDL drivers hired between June 1 and August 22, 2022. Re-hires are not eligible for the stipend.

END_OF_DOCUMENT_TOKEN_TO_BE_REPLACED

The sun strained through high, wispy clouds, beaming bright yellow warmth onto the windows of school buses that streamed into the bus terminal, returning from safely transporting students.

At all district locations, HISD Transportation Services is observing National School Bus Safety Week to raise awareness among students, staff, and the community about the importance of school bus safety – inside and outside the school bus.

END_OF_DOCUMENT_TOKEN_TO_BE_REPLACED

Transportation Services has completed more than half of school bus route scheduling for next year, department leadership announced Tuesday during the department’s Coffee & Conversations.

Transportation Services General Manager John Wilcots IV said the department got a head start on planning for the upcoming school year and now has 60 percent of routing and scheduling for the 2019-2020 school year already completed.

END_OF_DOCUMENT_TOKEN_TO_BE_REPLACED

Almost 80 bus routes impacting more than 3,750 students across the district have been updated this week and six major bus stops in west, south, and southwest Houston are being reinstated.

The changes are part of Transportation Services continued efforts to review and streamline operations, improve services, increase efficiency, and ensure all students arrive at school each day safely and on time.

END_OF_DOCUMENT_TOKEN_TO_BE_REPLACED

Last August, torrential rains flooded roads, streets, and highways, temporarily transforming them into lakes and rivers as the greater Houston area endured one of the worst disasters in local history.

As many people sought shelter from Hurricane Harvey, HISD Transportation Services team did the opposite — taking school buses out into the storm to rescue evacuating residents.

“This storm impacted our entire community — our students, our staff, our friends, our neighbors,” Transportation Services General Manager Tim Brown said. “It was important to me that we stepped in to help in any way that we could.”

END_OF_DOCUMENT_TOKEN_TO_BE_REPLACED 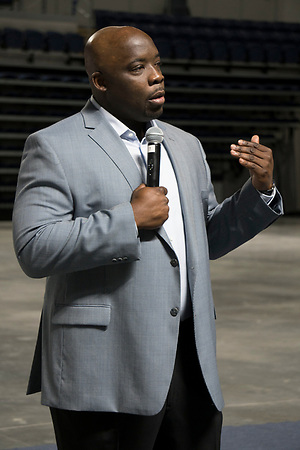 Houston Independent School District Interim Superintendent Grenita Lathan met with all HISD bus drivers and transportation staff on Friday to deliver a simple message of support: “I hear you.”

Lathan called the meeting so she could directly address employees and reinforce the important role they play in the success of students across the district.

“You truly are the first contact every child in this district has each day on his way to school,” Lathan said. “People think it’s just about the principals and teachers, but it’s about our bus drivers, our food service workers, our custodians. You are essential.”

A photo gallery and a video featuring emergency rescue training and bus riding safety in the Houston Independent School District Transportation Department were recognized among the nation’s best in 2013, according to School Bus Fleet, the leading magazine for school bus transportation nationwide.

The emergency rescue training took place in August 2013 and featured mock emergency drills to prepare bus drivers and attendants for a variety of crisis situations. The drills simulated the effects of a fire on a school bus, an armed intruder on board and a wreck involving a train. All activities involved real school buses, trains, vehicles, fire, smoke, weapons and staged injuries. The training was conducted in partnership with the Houston Fire Department. The photographs of this event were selected by School Bus Fleet magazine as Editors’ Picks for Photo Gallery of the Year for 2013.

In honor of National School Bus Safety week in October 2013, the HISD Transportation Department created a music video that covered such topics as proper boarding procedures, how to sit on a bus and the importance of reporting bullying. Students from Peck Elementary School, Yates High School and the High School for the Performing and Visual Arts were included in the video, along with district bus drivers and attendants. This video was included among both the most-viewed and most-liked stories by School Bus Fleet magazine readers for 2013. In addition, the video was also selected as Editors’ Picks for Videos of the Year for 2013. The videos were filmed by the district’s multimedia team.

“Both of these programs were incredibly fun and fully engaged our team and community,” said Nathan Graf, general manager for transportation. “Just being recognized for this work is reason for everyone here to be proud.”