The Texas Department of State Health Services will host an exercise Oct. 31 to Nov. 2 in the Houston area to test the ability of state and local partners to work together to provide medical supplies during an emergency.

The exercise focuses on the distribution of medical supplies from the Strategic National Stockpile, a store of large quantities of medicine and other items that can be deployed quickly to help protect the public in an emergency. Three HISD campuses — Jones, Scarborough and Westside high schools — will serve as distribution sites on Saturday, Nov. 2, the final day of the exercise.

Exercise activities may include the movement of large trailers, law enforcement vehicles and volunteers across multiple sites in Harris, Fort Bend, Montgomery, Brazoria, Galveston, Chambers and surrounding counties. These activities are for exercise purposes only and do not represent a real emergency.

A Westside High School freshman was cut with a knife Thursday morning when he helped fight off a man who was trying to abduct another student.

END_OF_DOCUMENT_TOKEN_TO_BE_REPLACED

Eight seniors from seven high schools throughout the Houston Independent School District have qualified as semifinalists in the prestigious National Achievement Scholarship Program.

END_OF_DOCUMENT_TOKEN_TO_BE_REPLACED 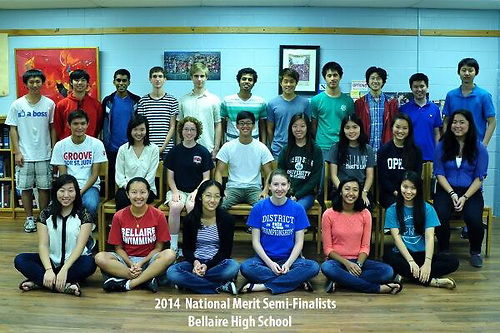 The students are among 16,000 from across the country to earn the semifinalist designation, allowing them the opportunity to continue in the academic competition and vie for more than 8,000 college scholarships worth roughly $35 million.

END_OF_DOCUMENT_TOKEN_TO_BE_REPLACED

Winners selected from talent pool of more than 15,000 finalists

Ten Houston Independent School District students from five high schools have been named National Merit Scholarship winners and will each receive a scholarship for their undergraduate studies.  The winners, selected from a pool of more than 15,000 finalists nationwide, were awarded based on their ability to demonstrate the strongest combination of accomplishments, skills and potential success in rigorous college studies.

END_OF_DOCUMENT_TOKEN_TO_BE_REPLACED

Ten percent of Texas winners are from HISD

April 10, 2013 – Seven Houston Independent School District students have been named National Achievement Scholarship winners and will each receive a $2,500 scholarship for their undergraduate studies.

Each year the National Merit Scholarship Corporation awards scholarships to African-American students who have excelled in academics and have demonstrated the potential for academic success in college.
END_OF_DOCUMENT_TOKEN_TO_BE_REPLACED

For students at Westside High School, it’s not slow and steady, but slow and energy-efficient that wins the race. Three Westside Engineering and Geosciences Academy (WEGA) teams will compete in the seventh annual Shell Eco-marathon Americas (SEMA) April 5-7, 2013 in downtown Houston.

The Shell competition recognizes students who design the highest miles-per-gallon performing vehicles. Student teams from around the world were tasked with designing, building, and testing ultra energy-efficient vehicles. The goals for the 2013 competition: surpass last year’s record of 2,188 MPG (awarded to a team from Indiana) and to take home the coveted win for “Best Electric Car”.
END_OF_DOCUMENT_TOKEN_TO_BE_REPLACED

Schools holding tutorials and competitions to prepare for exam

HISD students and teachers across the district are getting the word out about the upcoming STAAR exam, and some are using their creative and artistic side. Over at Austin High School students and staff formed teams to compete in a hallway decorating contest to see who could create and design the best STAAR display. Some of the themes included Godzilla, Mario Brothers and even Hollywood.

END_OF_DOCUMENT_TOKEN_TO_BE_REPLACED

The 2012-2013 school year is the second year for the new state assessment known as STAAR, which requires high school students to take End of Course exams or EOCs rather than grade-based assessments under TAKS. Last year, only high school freshmen were required to take STAAR End of Course exams. This year, all ninth- and tenth-graders in the state of Texas will take STAAR EOCs.

Under STAAR, a student’s score on an EOC would normally count toward 15 percent of their final course grade. However, the Texas Education Agency has deferred implementation of the 15 percent grading requirement for the 2012-2013 school year.

Westside High School freshmen and their parents wanting more information on STAAR recently came out to a special campus workshop. The informational session was held to help parents understand how the new EOC exams could impact their child’s course grades and GPAs, as well as their ability to graduate.

END_OF_DOCUMENT_TOKEN_TO_BE_REPLACED

Students in the culinary arts program at HISD’s Westside High School got served a big bowl of excitement recently when two retired master chefs came to the campus to give demonstrations as part of the Culinary Institute of America’s Ambassadors program.

Paul Prosperi, a master of the baking and pastry arts who has worked in Paris, London, and New York City, and Fritz Sonnenschmidt, a certified master chef who retired as dean of the CIA in 2002, showed students how to make three different types of meringue, and a Serbian rice-and-meat dish called “reis fleisch.”

“Chef Sonnenschmidt talked about the historical significance of food, how rice was used a lot in Spain and so many spices come from India,” said Chef Reginald Martin, who teaches culinary arts classes at Westside. “Chef Prosperi demonstrated the different techniques of making meringue: French, Swiss, and Italian.”

Chef Prosperi shows off a chocolate mousse dessert made with various types of meringue, presented in a martini glass.

Chef Martin, who began coordinating the master chefs’ visit last spring, said that the newest branch of the CIA (one of only three in the nation) opened in Texas just a few years ago, so Westside seemed like a natural partner.

“One student said it was the best day she’s ever had in culinary arts,” he said. “She was blown away by the opportunity to work with such high-level experts in the industry.”

About 50 Westside students attended the 2 1/2-hour demonstration, which was streamed live on the internet so that any other interested parties could watch as well. A recording of the broadcast is here.