Houston Independent School District Chief Operating Officer Brian Busby pledged more outreach and assistance to small business owners seeking to do business with the district in his first public appearance since being named to lead the district’s business operations division and its 7,000 employees.

“This is not a job for me, but a lifeblood,” Busby told the Greater Houston Black Chamber on Thursday. “I didn’t take this job to get to the next job. I took this job to make a difference in the lives of our students.”

END_OF_DOCUMENT_TOKEN_TO_BE_REPLACED

The groundbreaking ceremony for the new addition and renovations at Wilson Montessori School on Tuesday had all the usual celebratory elements from the obligatory shovels and hard hats to a distinguished list of speakers.

But Principal Beth Bonnette turned the morning into a teachable moment for the school’s more than 500 students when she challenged them to be part of history by contributing to a time capsule that will be placed within the walls of the new building.

END_OF_DOCUMENT_TOKEN_TO_BE_REPLACED

Wilson Montessori and Energy Institute High School will hold groundbreaking ceremonies in November to celebrate the start of construction on their new buildings. 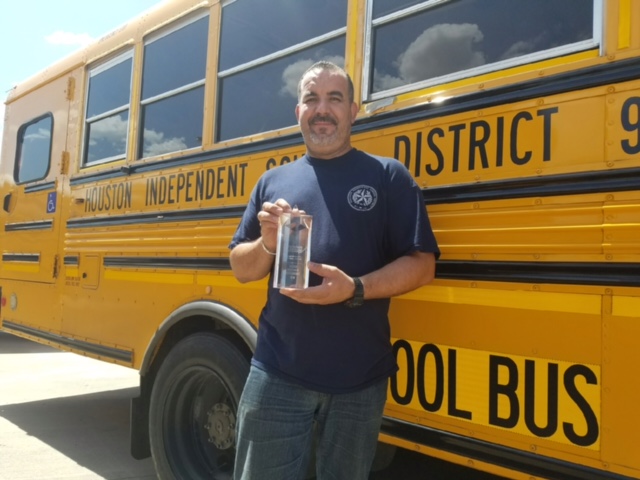 District is only one in Texas to receive special recognition

The Houston Independent School District Department of Transportation has been honored with the inaugural Leadership with Propane Autogas Award by the Propane Education and Research Council.

HISD is the only school district in Texas, and one of three in the country, to be recognized by the council for creating a cleaner environment for student bus riders by using propane school buses. The award recipients were announced last week in Reno, Nev. at the Green Bus Summit.

END_OF_DOCUMENT_TOKEN_TO_BE_REPLACED

Nine campuses from across the Houston Independent School District were recognized by the U.S. Environmental Protection Agency for reducing energy consumption by at least 20 percent over the last year.

The schools were recognized in June as part of the EPA’s 2015 Energy Star National Building Competition Battle of the Buildings Team Challenge, which encouraged organizations across the country to compete in their efforts to reduce energy and water consumption.

END_OF_DOCUMENT_TOKEN_TO_BE_REPLACED

HISD’s Energy and Sustainability department has announced the winner of its first districtwide Earth Month Campaign to raise awareness about the environment and promote sustainable actions that reduce campus carbon footprints.

END_OF_DOCUMENT_TOKEN_TO_BE_REPLACED

HISD’s Energy and Sustainability department is encouraging campuses to take the Earth Month Pledge in April to raise awareness about the environment and to promote sustainable actions that reduce campus “footprints.”

END_OF_DOCUMENT_TOKEN_TO_BE_REPLACED

HISD’s brand new Mark White Elementary School (2515 Old Farm Road, 77063) will be opening its doors for the first time in the fall of 2016, and interested parents have until Friday, March 25, to submit their applications for admission.

The school, which is located just north of Westheimer on the district’s west side, will offer a French-language immersion program to students in prekindergarten and kindergarten during its first year of operation, and expand the program by one additional grade each year until 2021.

END_OF_DOCUMENT_TOKEN_TO_BE_REPLACED

The program, designed and coordinated by the NWF, U.S. Environmental Program and EPA Taiwan, matches schools in the United States directly with sister schools in Taiwan to work together on a global level to address environmental- or sustainability-related issues.

END_OF_DOCUMENT_TOKEN_TO_BE_REPLACED

Each month, Gregory-Lincoln Education Center teacher Kellie Karavias leads a small group of her students on a walking field trip to whip up a delicious and healthy meal at Houston’s top restaurant The Pass & Provisions.

The class isn’t an ordinary culinary arts course or cooking class. In fact, students carefully select a few fruits or vegetables harvesting at the time in their school garden, then work with chefs Seth Siegel-Gardner and Terrence Gallivan to create a dish that’s both nutritious and delicious.

Karavias says the cooking classes began after sending out a tweet to the chefs asking if she could bring her students to The Pass & Provisions—and she received a response.

“I went over [to the restaurant] and asked if I could speak to the chef, and Seth came out with hors d’oeuvres,” Karavias said. “We started talking, and he wanted to know what we were doing at the school, so I invited him and Terrence over.”