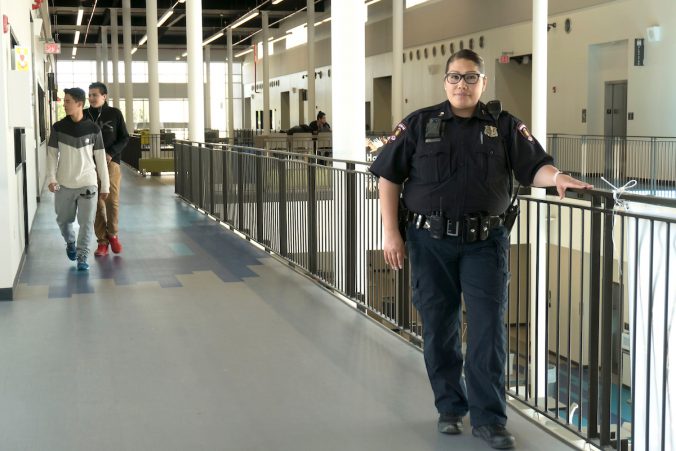 Each school day at the heart of Sharpstown High School is a bubbly campus officer whose contagious smile and positive attitude reflects on the students she waves to.

“Hey Michelle. How did you do on your test?” Community Outreach Officer Vanessa Losey says as she greets students walking between classes. “Hi ’mijo,’” — Spanish for son — “How are you doing?”

Though small in stature, Losey is known for her rapid walking pace, which, according to Sharpstown students, no one can keep up with. Every day, Losey can be found rushing between corridors and classrooms with four noisy radios in tow as she heads to her next post or assignment. END_OF_DOCUMENT_TOKEN_TO_BE_REPLACED

Lining the sidewalk outside the school, Sharpstown JROTC members lifted their ceremonial swords to the sky while band members played celebratory music to officially welcome their fellow students to their new campus.

Built as part of HISD’s voter-approved 2012 Bond Program, the new school formally opened its doors on Monday. To celebrate the occasion, students and teachers gathered first at their old building and then ceremoniously walked together to the new school. END_OF_DOCUMENT_TOKEN_TO_BE_REPLACED

With construction almost complete, Sharpstown High School students are on track to begin the 2018 spring semester in their new building.

Installation of flooring, kitchen equipment, doors, auditorium electrical wiring, exterior landscaping, and the elevator are all underway, project officials said. In addition, ceilings are being enclosed and exterior and interior painting is wrapping up. Furniture is set to be delivered in early November.

END_OF_DOCUMENT_TOKEN_TO_BE_REPLACED

Construction of the new Sharpstown High School is nearly two-thirds of the way complete, with the new facility expected to open to students in January 2018 when they return from winter break.

Project officials said the concrete walls of the gym and exterior glass wall in the main building are nearly complete, and the interior painting and tiling are halfway done. In addition, air conditioning units have been installed on the roof, wooden cabinets are being installed in science labs, and the outdoor amphitheater is being formed. END_OF_DOCUMENT_TOKEN_TO_BE_REPLACED

About 150 students from four HISD campuses, including North Houston Early College, Sharpstown, and Wheatley high schools, got a glimpse into both college life and the careers that may await them after completing it when they took part in Rice University’s Empower STEM Expo earlier this month.

END_OF_DOCUMENT_TOKEN_TO_BE_REPLACED

Houston ISD mourns the loss of former HISD teacher and administrator Felix Cook. Please join us in sharing your memories of this Houston education pioneer by posting in the comments section below.

Felix Cook was a teacher and administrator at HISD for 36 years, starting in the 1940s. He served as a teacher and coach at E. O. Smith Junior High and Phillis Wheatley High School and as the principal of Sharpstown High School. Cook also served for 12 years as a deputy superintendent. HISD named a school for him in 2006 on the site of the old James Sanderson Elementary School.

Cook (right), along with HISD trustee Lawrence Marshall (left) and administrator Faye Bryant (center), were honored as HISD’s Living Legends in a ceremony in February 2012.

Felix Cook is a native of Houston and a product of the Houston Independent School District (HISD), having attended Sanderson Elementary School and graduated from Phillis Wheatley High School.  He attended Wiley College in Marshall, Texas, received a Masters of Education Degree from Texas Southern University (TSU), and an Honorary Doctorate of Humanities from Wiley College.

Mr. Cook’s professional career was devoted to public education at both Houston ISD and Texas Southern.  While at HISD, he served as a teacher and coach at E.O Smith Junior High School and Phillis Wheatley High School.  He served as principal at Sharpstown High School, superintendent for secondary schools, and deputy superintendent in charge of personnel.  In 1986, after 36 years of service with HISD, he retired.  He also served as adjunct professor for higher education at TSU from 1974 to 1994.

He has been recognized with many other honors and awards from organizations including the United Negro College Fund, Wiley College, City of Houston Police Department, Texas Children’s Hospital and M.D. Anderson Hospital.

“The Planets” is one of the Symphony’s most celebrated pieces. It tells the story of NASA’s exploration of the solar-system while high-definition images of the planets are shown on a screen behind the orchestra.

Today’s performance is part of an ongoing partnership between the Houston Symphony and HISD. The Symphony is donating a DVD copy of its performance to each of the district’s 279 schools. Teachers will also receive the educational companion disc, which will provide interactive-cross curriculum lesson plans for all grade levels.
“We’re very excited that our band has been chosen to perform with the Houston Symphony. This is a tremendous honor for Sharpstown High which speaks volumes about the hard work of our teachers and students,” said Principal, Rob Gasparello.

HISD Board of Education Trustee Greg Meyers and Houston Symphony General Manager Steven Brosvik are scheduled to speak at today’s event.
“The Houston Symphony and the Houston Independent School District have had a rich and deep partnership and we are pleased to continue to grow these opportunities,” Brosvik said. “As music is needed to provide a complete education for our children, we hope this resource will provide a synergy for learning across the curriculum.”

The Symphony’s generous donation is being made possible because of a gift from Marathon Oil.