Community members gathered in the Bellaire High School auditorium to witness the unveiling of the new school building’s design.

Bellaire’s $132 million project is a part of the 2012 Bond Program. The new building will feature a new three-story academic wing – containing classroom and administrative spaces – along with multiple flexible learning areas for group collaboration, library with makerspace, two gymnasiums, and an exterior courtyard.

“I think the renderings are amazing,” Bellaire Principal Michael McDonough said. “When you see the shared spaces, you think community, and when the students are together as a community, it invigorates school pride.”

END_OF_DOCUMENT_TOKEN_TO_BE_REPLACED 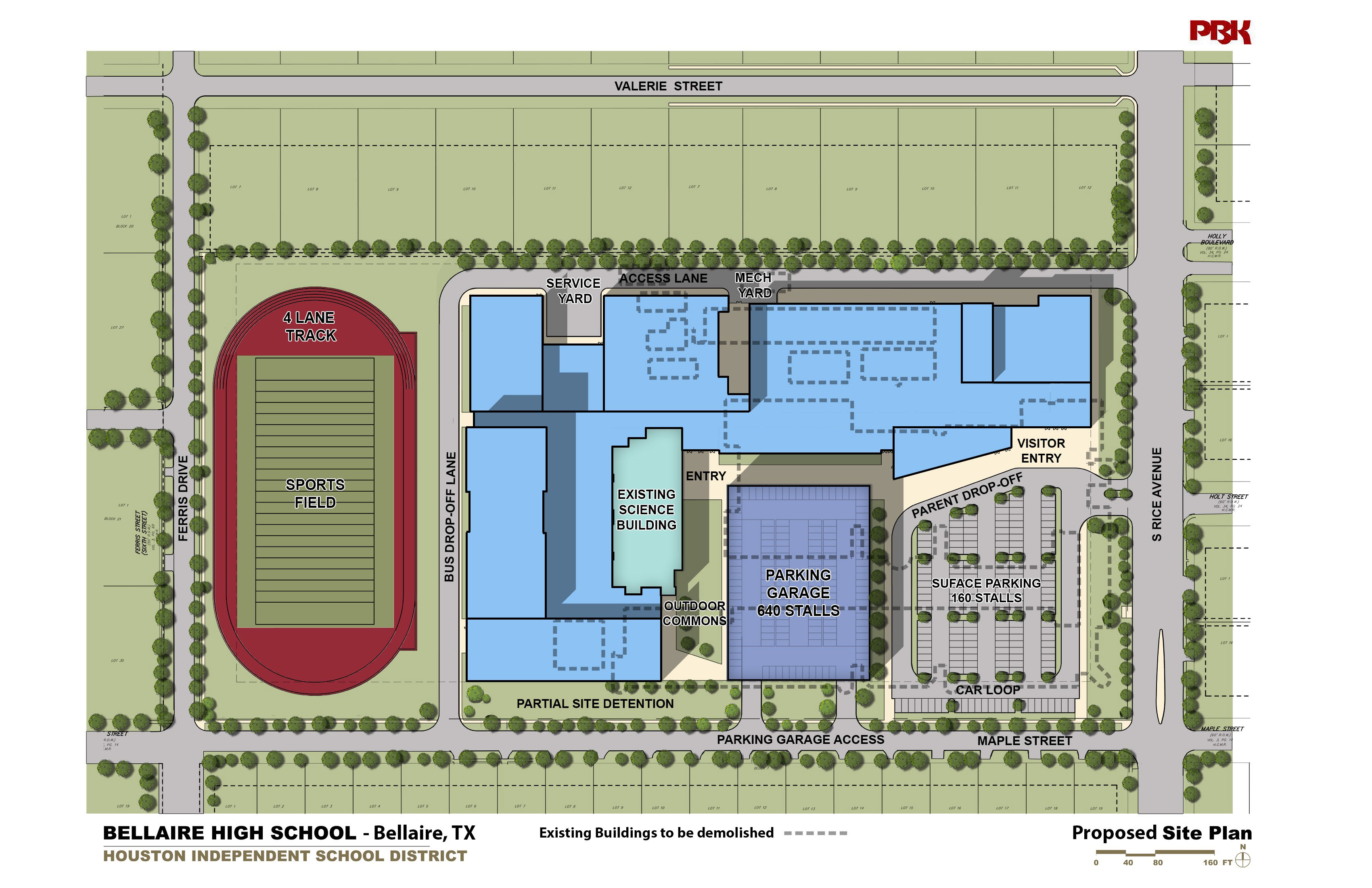 The Houston Independent School District is moving forward with a plan to rebuild Bellaire High School at its current location on South Rice Boulevard and has formally submitted applications to the City of Bellaire for required permits and variances.

The first stop for the project proposal will be the city’s Planning and Zoning Commission on June 13, when the request for a Specific Use permit will be considered. In addition, the district is seeking variances from the Board of Adjustments that would allow construction of a building of approximately 434,000 square feet with up to four stories on some portions toward the interior of the site.

The Board of Adjustments meeting is June 15. If the Specific Use permit and variances are approved, the project then could head to the Bellaire City Council in August for a public hearing and final vote.

END_OF_DOCUMENT_TOKEN_TO_BE_REPLACED

Two HISD educators were surprised by H-E-B on Wednesday with news that they are finalists for the 2016 H-E-B Excellence in Education Awards, one of the largest monetary programs for educators in Texas and the nation.

The two are among eight educators from across Houston and 40 across the state who were selected as award finalists. They now will go on to compete at the state level, where they will have the chance to win additional cash prizes.

END_OF_DOCUMENT_TOKEN_TO_BE_REPLACED 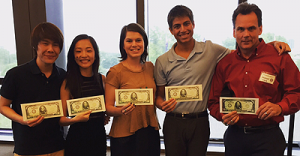 Four students from Bellaire High School have been named the national champions of the 2015 National Personal Finance Challenge, after beating out more than 22 other teams to earn the title.

The competition took place in Kansas City on May 22, and students Christina Mao, Kenneth Yu, Claire Weddle, and Akash Shukla placed first, second, third, and fifth (respectively) in the country on individual tests before advancing to the third round of the competition, which was a team event.
END_OF_DOCUMENT_TOKEN_TO_BE_REPLACED 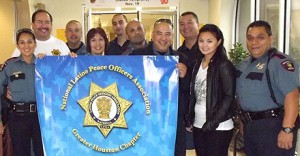 Thanksgiving came a little earlier than usual for a dozen needy HISD students this year, but they were still delighted to receive free turkey dinners with all the trimmings from local members of the National Latino Peace Officers Association (NLPOA).

END_OF_DOCUMENT_TOKEN_TO_BE_REPLACED 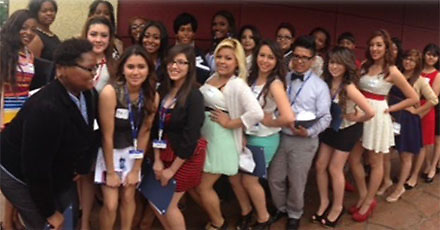 END_OF_DOCUMENT_TOKEN_TO_BE_REPLACED

Thirteen African-American seniors from four HISD high schools are among the semifinalists for the National Achievement Scholarships.  These students will have the opportunity to compete for 800 scholarships worth more than $2.5 million that will be offered next spring.

The National Achievement Scholarship program is a privately financed academic competition that was started in 1964 to recognize and offer scholarships to academically promising African-American students throughout the nation.

To be considered for this scholarship, more than 160,000 high school juniors took the 2011 Preliminary SAT/National Merit Scholarship Qualifying test.  The nationwide pool of semifinalists, about 1,600 students, includes the highest-scoring entrants in each state.

To become a finalist, semifinalists must have an outstanding academic record throughout high school, be endorsed and recommended by a high school official, write an essay, and earn SAT scores that confirm the student’s earlier performance on the qualifying test.

“We are very proud of these students and their academic achievements,” said HISD Superintendent Terry Grier.  “To be recognized among the nation’s best students by the National Achievement Scholarship program is truly an honor and a testament to their hard work.”

The selected semifinalist students are from the following HISD schools: Bellaire High School, DeBakey High School for Health Professions, the High School for the Performing and Visual Arts, and Westside High School.  The 2013 National Achievement Winners will be announced starting in April 2013.

“The National Merit Scholarship Program has a long tradition of excellence,” said HISD Superintendent Terry Grier. “We are extremely proud of these students being recognized nationally for their academic achievements.  Their accomplishments are a testament to their dedication and hard work.”

To be considered for this scholarship program, about 1.5 million high school juniors took the 2011 Preliminary SAT/National Merit Scholarship qualifying test. The nationwide pool of semifinalists, about 16,000 students, includes the highest-scoring entrants in each state.

To become a finalist, the semifinalist must have an outstanding academic record throughout high school, be endorsed and recommended by a high school official, write an essay, and earn SAT scores that confirm the student’s earlier performance on the qualifying test.

The 2013 National Merit Scholarship Winners will be announced starting in April 2013.

Here are the previously announced winners for 2012:

The winners were juniors when they received the highest scores on the 2010 Preliminary SAT/National Merit Scholarship Qualifying test.  The students also had to demonstrate an outstanding academic record; had to be actively involved in their school and the community and had to be recommended by a high school official. This year approximately 8,100 students nationwide will receive National Merit Scholarships totaling more than $35 million.

The majority of awards offered each year are underwritten by approximately 440 independent corporate and college sponsors that support NMSC’s efforts to recognize scholastically talented youth and to encourage the pursuit of academic excellence.

Seniors from Bellaire, Westside, and The High School for the Performing and Visual Arts make the cut

Seven HISD seniors have been selected as U.S. Presidential Scholar candidates, one of the nation’s highest honors for high school students.

Six of these candidates were identified for the academic component of the program based on having scored exceptionally well on the SAT or the ACT college entrance exams. These students are Alexandra Gibner, Weiting Ji, Daniel A. Yun, Amy W. Jiang, and Vincent P. Su from Bellaire High School, and Lenzi C. Daniel from Westside High School. Victor Lozano, a student at The High School for Performing and Visual Arts, is a Presidential Scholar in the Arts candidate.