Seven Houston ISD Odyssey of the Mind teams advanced to the world finals after the state competition on Saturday.

Odyssey of the Mind teaches students how to solve problems creatively as a group with up to seven members.

END_OF_DOCUMENT_TOKEN_TO_BE_REPLACED

Six Houston ISD schools have Odyssey of the Mind teams that advanced to the world finals after the state competition on Saturday.

Odyssey of the Mind teaches students how to solve problems creatively as a group with up to seven members.

END_OF_DOCUMENT_TOKEN_TO_BE_REPLACED 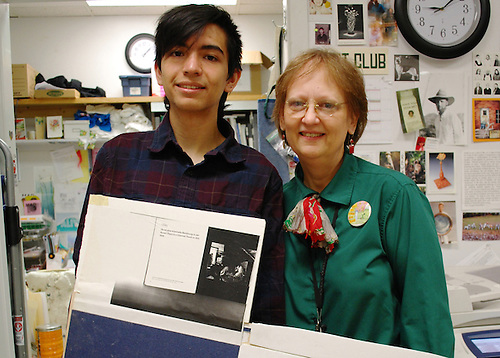 High School for the Performing and Visual Arts student Patrick Zapien is a gold medal art portfolio winner, which earned him a $10,000 scholarship.

END_OF_DOCUMENT_TOKEN_TO_BE_REPLACED 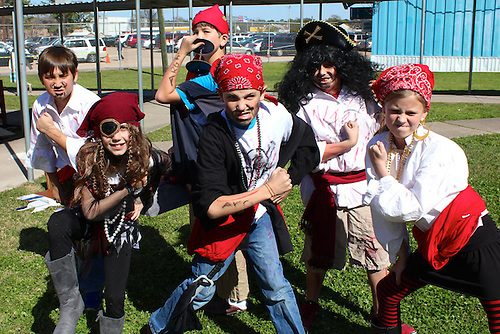 Students from Horn Academy pose as pirates for part of their Odyssey of the Mind competition.

Fourteen schools participated in the state Odyssey of the Mind competition on Saturday, April 13, 2013 and students from nine of those schools will advance to the World Finals in May.

Odyssey of the Mind has become the largest international creative problem-solving competition worldwide, and HISD teams have been working hard to on their projects and presentations since October.
END_OF_DOCUMENT_TOKEN_TO_BE_REPLACED

Students at Sterling High School and Carnegie Vanguard High School will soon be the beneficiaries of a new partnership with the Houston Airport System.

The club will allow teenagers from both campuses with an interest in aviation or aerospace to explore those subjects through a series of monthly meetings held during the school year. It is designed to increase the number of young people pursuing careers in those fields.

To participate, students must attend either Carnegie or Sterling, maintain a GPA of at least 2.5, and meet various other criteria.

“The National Merit Scholarship Program has a long tradition of excellence,” said HISD Superintendent Terry Grier. “We are extremely proud of these students being recognized nationally for their academic achievements.  Their accomplishments are a testament to their dedication and hard work.”

To be considered for this scholarship program, about 1.5 million high school juniors took the 2011 Preliminary SAT/National Merit Scholarship qualifying test. The nationwide pool of semifinalists, about 16,000 students, includes the highest-scoring entrants in each state.

To become a finalist, the semifinalist must have an outstanding academic record throughout high school, be endorsed and recommended by a high school official, write an essay, and earn SAT scores that confirm the student’s earlier performance on the qualifying test.

The 2013 National Merit Scholarship Winners will be announced starting in April 2013.

Here are the previously announced winners for 2012:

The winners were juniors when they received the highest scores on the 2010 Preliminary SAT/National Merit Scholarship Qualifying test.  The students also had to demonstrate an outstanding academic record; had to be actively involved in their school and the community and had to be recommended by a high school official. This year approximately 8,100 students nationwide will receive National Merit Scholarships totaling more than $35 million.

The majority of awards offered each year are underwritten by approximately 440 independent corporate and college sponsors that support NMSC’s efforts to recognize scholastically talented youth and to encourage the pursuit of academic excellence.

Who: The June 2012 edition of HISD Up Close hosted by HISD Board of Education President Michael Lunceford takes viewers on a hard-hat tour of the new Carnegie Vanguard High School campus. This summer, HISD Construction and Facility crews are finishing up the state-of-the art facility so students and staff can move in for the start of 2012-2013 school year. The show also features interviews with Carnegie Principal Ramos Moss and the HISD 2011-2012 Principals and Teachers of the Year.

When: Throughout the month of June at www.houstonisd.org and on HISD-TV (Comcast channel 18 and AT&T U-verse channel 99) on Wednesdays, Fridays and Sunday at 8:30 p.m.

Why: HISD Board President Michael Lunceford is committed to showcasing some of the amazing things happening at HISD schools across the district, in addition to highlighting district initiatives and accomplishments. His monthly show features a tour of an HISD school or project, and segments showcasing the academic accomplishments of HISD students and the dedication of HISD staff.

The strong showing on the Washington Post High School Challenge rankings and Newsweek’s America’s Best High Schools of 2012 are the result of HISD’s Advanced Placement initiative that began with the 2009-2010 school year.  That was the year Superintendent Terry Grier called on all high schools to expand student access to college-level AP courses and the district agreed to pay the exam fees for all students in those classes.

“This is great recognition of the hard work being done by teachers and students at high schools across the Houston Independent School District,” said Superintendent Terry Grier.

Today, all HISD high schools offer a minimum of 10-15 AP classes, and the number of exams earning a score of 3 or higher, which is the score most colleges require for course credit, is up 35 percent.

HISD’s strong AP progress is one reason the district is among four finalists for the Broad Prize for Urban Education, which recognizes the top urban school district in America. This week, a Broad Prize panel of experts is touring HISD schools as part of the evaluation process.

Twenty-one HISD high schools earned recognition in the Washington Post High School Challenge, a list of 1,800 schools representing the top 9 percent in the nation when it comes to preparing graduates for college. Only 125 Texas high schools made the list, and HISD campuses – Carnegie Vanguard, Eastwood Academy, and DeBakey High School for Health Professions – represent three of the national top 100.

HISD high schools also occupy 9 out of 1,000 positions on Newsweek’s list of America’s Best High Schools.  Only 86 Texas high schools made the Newsweek list. HISD schools on the list are: