The virtual event is free and is available for parents, students, and teachers who would like to learn the basics of HTML. Workshops in both English and Spanish are available.

END_OF_DOCUMENT_TOKEN_TO_BE_REPLACED

Zaira Gomez has been selected as the new principal of Cornelius Elementary School. Gomez is an alumni of HISD, where she attended Sunnyside Elementary School, Attucks Middle School and Worthing High School. Gomez has served as a clerk, teacher, literacy coach, and assistant principal. During her time at Cornelius, she worked with students, parents, teachers, and leaders to increase the academic performance of the school. She holds a bachelor’s in Psychology from University of Houston-Downtown, a master’s in Counseling from University of St. Thomas, and a principal certification from Lamar University.

The fifth-graders at Cornelius Elementary School listened intently as their classmate’s mother spoke to them on Career Day recently. Khassidy’s mom, Ieshia Champs, was telling students to stay in school if they want to become all the things they had just told her they want to be—a brain surgeon, veterinarian, basketball player, teacher.

“You can’t do anything without school, nothing at all,” Champs said. “What you are learning here in school every day is going to shape your entire future.”

The recent Texas Southern University Thurgood Marshall School of Law graduate gained notoriety after a photo of her dressed in her cap and gown surrounded by all five of her children was shared hundreds of thousands of times on social media.

END_OF_DOCUMENT_TOKEN_TO_BE_REPLACED 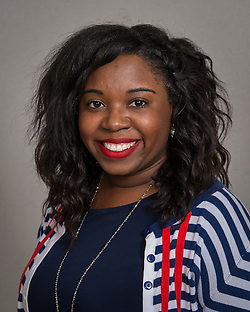 Angel Wilson has been selected as the new principal of Cornelius Elementary School. Wilson has served as a teacher and Teacher Development Specialist, and she has a wide range of campus leadership experience in diverse communities such as Durkee Elementary, where she was dean of instruction; Thompson Elementary, where she was assistant principal; and Lanier Middle School, where she was also assistant principal. Wilson holds a Bachelor of Science in Interdisciplinary Studies with an emphasis in Early Childhood Education and a Masters in Educational Administration. Both degrees are from Prairie View A&M University.

The students’ speeches focused on the question, “What would Dr. King say in his campaign speech if he were running for president this year?” as part of the 20thannual Martin Luther King Jr. Oratory Competition sponsored by Gardere Wynne Sewell LLP.

Students from Cornelius, Pleasantville, Wainwright, and Whidby elementary schools were featured in news stories on the competition, thanking Dr. King for his service and legacy. Parts of their speeches also were highlighted on TV.

Cornelius fifth-grader Richard Espinoza-Garza, who won the competition, told ABC that Dr. King “meant we should all come together – all races, all cultures.”

Click the links below to view stories on HISD students participating in the oratory competition.

For the third time in a row, a student from Cornelius Elementary School has taken home the top prize at the Martin Luther King Jr. Oratory Competition. Fifth-grader Richard Espinoza-Garza was all smiles as he took center stage to claim his prize. Now in its 20th year in Houston, the annual competition is sponsored by Gardere Wynne Sewell LLP.

Principal Karen Jackson attributed her school’s three-year winning streak to a combination of strong support and a positive campus culture. “We are highly competitive and demand excellence from our kids in everything we do,” said Jackson. “We have a speech coach, and every winner from our campus has had over-the-top parental support.”

This year, 12 finalists answered the question, “What would Dr. King say in his campaign speech if he were running for president this year?” END_OF_DOCUMENT_TOKEN_TO_BE_REPLACED

Each year, students across the district show off their oratory skills in the annual Martin Luther King Oratory Competition at Antioch Missionary Baptist Church of Christ (500 Clay Street, 77002). This year’s theme, “What would Dr. King say in his campaign speech if he were running for president this year?” will be tackled by fourth- and fifth-graders from several HISD schools on Friday, Jan. 15, 2016, from 10 a.m. – 12:30 p.m.

END_OF_DOCUMENT_TOKEN_TO_BE_REPLACED

Here are the individual results: END_OF_DOCUMENT_TOKEN_TO_BE_REPLACED

Every year since 1996, fourth- and fifth-graders from two dozen HISD schools have competed in this annual contest, which challenges students to write and present a short original speech on a subject related to the slain civil rights leader. The topic this year was, “If Dr. King were speaking at a March on Washington today, what would he say?”

“If Dr. Martin Luther King Jr. was speaking at a March on Washington today, he would say: As I consider the past 50 years of progress, I can’t help but wonder if for every two steps we have taken forward, we have taken three steps back,” Amari said. “Have we fought so hard to instill that pride that we fail to include words like integrity, self-respect, and even a simple hi? Have we allowed economic and social status to lull us into a crippling complacency and a sense of entitlement? Simply meaning, are we putting $200 sneakers on our children who can barely read or solve basic mathematical equations rather than teaching them how to invest the same $200 into the actual shoe company? Have we been so busy trying to give our children what we didn’t have that we forgot to give them what we did have?”