A sea of red flooded the main entrance of Furr High School on Friday morning as the cheerleaders, Sparkle Dancers — dressed in red and white uniforms — and band pepped up the crowd in celebration of the school’s building dedication ceremony.

Music and chants echoed through the air, and lush trees and landscaping lined the length of the brightly colored 182,000-square-foot-building, offering an ornate backdrop to a long red ribbon stretched across the building’s main walkway.

“Close your eyes for a moment and imagine a high school that empowers students to tackle environmental injustice and becomes the central green hub of their community,” said Furr Interim Principal Rosa Hernandez to attendees. “Imagine spaces filled with student voices, trust, school spirit, and a flexible learning environment.” She pointed to the new building, saying “That’s what we have here.”

END_OF_DOCUMENT_TOKEN_TO_BE_REPLACED 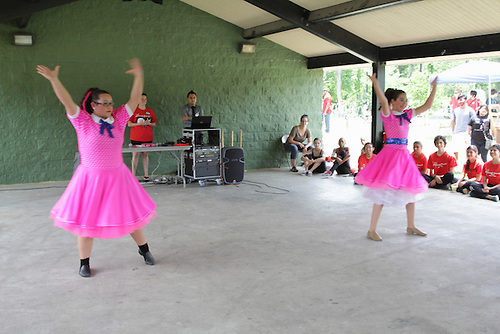 Students at Furr HS kicked off their summer with a fun event to promote unity, and a camera crew from Spain was there to film all the action for a documentary.

Civility in the Park, now in its second year, took place at Herman Brown Park Pavilion, 400 Mercury Dr., on Sat., June 1 and students said it means a lot to them.

END_OF_DOCUMENT_TOKEN_TO_BE_REPLACED

A number of HISD principals say students and staff at their schools are celebrating one day after voters approved the Houston Schools Bond.

Students from Furr High School recently held Civility in the Park, an event to celebrate the new spirit of community that exists in their corner of the east side. The area that was once plagued with gang violence and crime has been transformed in recent yaers thanks to dedicated citizens.

Civility in the Park featured musical performances, face painting, dancing and food. See photos from the free event below.

Johnston Middle School student Charli McBean is already actively looking at what colleges she wants to attend once she graduates. So when the College Board announced an HISD video contest celebrating the benefits of higher education, the teenager was quick to round up some of her fellow classmates and enter.

“We all worked together as a group and we sat there and brainstormed and brainstormed until we finally came up with an idea,” McBean said. The end result is a music video that celebrates the “Five Ways Ed Pays” – better health, greater wealth, closer family, more security, and stronger community.

McBean and her Johnston teammates Zoe Caballero, Alicia Bozeman, and Anthony Okoro were recently honored for their creative efforts at the February HISD Board of Education meeting. Their winning video was shown to a packed crowd and all the students received new iPads from the College Board.

Also receiving iPads and iPods for their winning videos were two other student teams from Johnston and a team from Furr High School.

The HISD Board of Education on Thursday unanimously approved a plan to draw students back into six neighborhood high schools with strong Career and Technical Education programs. The Board endorsed the plan after hearing from several parents who voiced support for the strategic investment that will strengthen community high schools.

Students at Furr, Kashmere, Long, Scarborough, Sterling, and Booker T. Washington high schools will be able to enroll in the newly created Houston Innovative Learning Zone (HILZ) programs beginning this summer. By the time these students graduate high school, they will have earned a college associate’s degree and valuable career certifications to help them immediately land lucrative jobs in some of the region’s most in-demand professions.

END_OF_DOCUMENT_TOKEN_TO_BE_REPLACED

The HISD Board of Education is scheduled to vote today on a plan to draw students back into six neighborhood high schools with strong Career and Technical Education programs.

Under this proposal, the School of Pharmacy Technology at Long would prepare students for the growing pharmaceutical industry by providing them with the clinical and business skills needed to work successfully alongside pharmacists and physicians.

If the program is approved, students at Furr, Kashmere, Long, Scarborough, Sterling, and Booker T. Washington high schools would be able to enroll in the newly created Houston Innovative Learning Zone (HILZ) programs beginning this summer. By the time these students graduate high school, they will have earned a college associate’s degree and valuable career certifications to help them immediately land lucrative jobs in some of the region’s most in-demand professions.

“These HILZ programs take traditional vocational education to a higher level,” said HISD Superintendent Terry Grier. “HILZ graduates will leave our high schools with certifications that Houston employers seek when filling high-paying job vacancies. HILZ graduates will also have 45 to 60 hours of college credit from our Houston Community College partner. These credits will transfer to articulated programs at Texas universities, positioning HILZ graduates for success in a four-year college if they choose to forego an immediate career.”