END_OF_DOCUMENT_TOKEN_TO_BE_REPLACED

Hundreds of HISD seniors will walk across the stage this spring during graduation ceremonies planned for May 26 through June 9.

A few will be taking place early (HSPVA and E-STEM on May 26 and May 31, respectively) or later (Liberty HS on June 10), so be sure to check the schedule for times and locations at HoustonISD.org/GraduationCalendar. END_OF_DOCUMENT_TOKEN_TO_BE_REPLACED

Cheers, chants, and high-fives echoed through the hallways at HISD elementary schools this week as high school seniors marched single-file past their younger peers – a tradition of “grad walks” that are gaining in popularity every year.

The walks were held not only to give the seniors a sense of pride, but to help inspire the elementary students to follow on their own paths toward becoming Global Graduates.

Nearly 11,000 seniors from HISD will graduate in dozens of ceremonies across the city starting today.

Surrounded by his family and doctors, as well as HISD Board President Wanda Adams, Madison Principal Orlando Reyna, and staff members, senior Erick Reyes donned a graduation cap and gown for a moving bedside ceremony at Texas Children’s Hospital on Friday.

Fox News was there and posted this story on their website.

Erick has been suffering with bone cancer for the past two years and was recently moved to hospice care. He enrolled at Madison in 2012 and was well on his way to graduation when he was diagnosed with bone cancer.  Erick struggled to continue his studies while receiving treatment but had to stop due to the severity of his illness. He went into remission and returned to campus to finish his final classes, but unfortunately, the cancer returned. Although Erick was unable to complete his dream of walking across the stage with his classmates, he was pleased to be honored with his diploma.

END_OF_DOCUMENT_TOKEN_TO_BE_REPLACED

Hundreds of HISD students will walk across a stage in the spring to collect their diplomas as part of the district’s annual graduation ceremonies.

Most ceremonies will take place at various locations around the city (primarily the Barnett Fieldhouse, Butler Fieldhouse, Delmar Fieldhouse, NRG Arena/Stadium, Texas Southern University campus, and Wilkins Pavilion) between Friday, May 26, and Sunday, May 28.

However, a few will be taking place earlier (E-STEM, Mickey Leland College Preparatory Academy, Victory Prep – North, and Victory Prep – South on Thursday, May 25) or later (Liberty HS on Sunday, June 4), so be sure to check the schedule for times and locations at HoustonISD.org/GraduationCalendar.

END_OF_DOCUMENT_TOKEN_TO_BE_REPLACED

HISD’s Drop Out Prevention Office is looking for volunteers to help with HISD’s annual Grads Within Reach walk, which will take place 8 a.m. to 12 p.m. on Saturday, Sept. 10, 2016.

Please help us visit the homes of students who have not returned for the 2016-2017 school year. These students must re-enroll in high school to complete the basic requirements for a high school diploma.

If you can help, fill out this form to register to walk with a group from the HISD high school of your choice. You will be able to select a high school when you complete the form.

For training materials, please email CSantos2@HoustonISD.org and a packet will be sent to you. For more information, click here.

Editor’s Note: Thousands of HISD seniors will receive their diplomas during graduation ceremonies across the district through the weekend. Many of our students have overcome challenging circumstances during their educational journeys. We are sharing a few of their stories this week. END_OF_DOCUMENT_TOKEN_TO_BE_REPLACED

Nearly 10,000 high school seniors from across the Houston Independent School District will receive their diploma at graduation ceremonies held this week for the Class of 2016.

The district’s first graduation ceremony will be held Tuesday, May 24 for the Mickey Leland College Preparatory Academy for Young Men with Houston Mayor Sylvester Turner as keynote speaker. The school will graduate its second class of seniors this year with 11 students. The 6th through 12th grade campus is one of two single-sex academies established by HISD in 2011. The ceremony is scheduled for 10:30 a.m. Tuesday at the Kingdom Builders Center, 6011 West Orem Dr. Mayor Turner also will speak at the graduation ceremony Thursday, May 26 for Energized for STEM Academy High School and at the ceremony for Carnegie Vanguard High School on Friday, May 27.

Additional graduation ceremonies will take place around the city between Friday, May 27 and Sunday, May 29 at various locations, primarily at the Barnett Fieldhouse, Butler Fieldhouse, NRG Stadium, Texas Southern University campus, and Williams Pavilion. END_OF_DOCUMENT_TOKEN_TO_BE_REPLACED 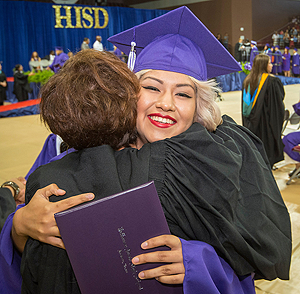 A student from Davis HS at the 2015 graduation ceremony.

Hundreds of HISD students will take their first steps into adulthood this spring, when they walk across a stage to collect their diplomas as part of the district’s annual graduation ceremonies.

Most ceremonies will take place at various locations around the city (primarily the Barnett Fieldhouse, Butler Fieldhouse, NRG Arena/Stadium, Texas Southern University campus, and Williams Pavilion) between Friday, May 27, and Sunday, May 29.

However, a few will be taking place earlier (Leland College Prep on Tuesday, May 24; E-STEM on Thursday, May 26) or later (Liberty HS on Sunday, June 12), so be sure to check the schedule here for details. You can also find it at www.HoustonISD.org/GraduationCalendar.