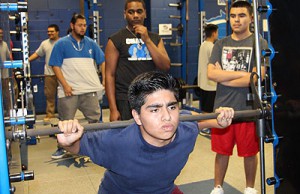 END_OF_DOCUMENT_TOKEN_TO_BE_REPLACED

More than 650 students and parents at Chavez HS dove into life after high school Saturday at the school’s second College and Career Readiness Forum.

END_OF_DOCUMENT_TOKEN_TO_BE_REPLACED

HISD’s PowerUp technology initiative is receiving national attention this week in Education Week’s 2015 Leaders To Learn From report, for “setting the bar for how to manage the digital transformation of a large urban school system.”

Superintendent Terry Grier and Chief Information Officer Lenny Schad are cited for their leadership on PowerUp, which combines a one-to-one laptop program for high school students with an all-encompassing digital “HUB” accessible to students, teachers, and parents for information, teaching, and collaboration.

The article also focuses on Chavez HS, whose students have embraced the laptop program that allows them to use the devices both in and outside school.

END_OF_DOCUMENT_TOKEN_TO_BE_REPLACED

Felipe Guillén has been a student at Stanford University since last fall, but the Chávez High School graduate might not be at his “new home” at all if it weren’t for HISD’s EMERGE program.

“My dream became a reality because of those who believed in me,” said Guillén, who was this year’s featured student speaker at the State of the Schools luncheon on Feb. 11. “The EMERGE program changed my understanding of the world and opened my mind up to new things.”

END_OF_DOCUMENT_TOKEN_TO_BE_REPLACED

For Licensed Athletic Trainer (LAT) Stephanie Polydore, one of the most gratifying aspects of her job is helping injured student athletes get back on track—both literally and figuratively.

“I love helping athletes get back to their full ability to compete in their sport,” said Polydore, who also teaches a sports medicine class at Waltrip High School.

The former stadium-based LAT is now one of only two campus-based LATS in HISD (the other is at Chávez HS). And while Polydore wasn’t able to salvage the football season for senior Xavier Smith, who broke his leg during the very first scrimmage of the season, thanks to the rehab he completed under her supervision, “he says he feels stronger now than he did before he was injured. He’s actually going to run track this spring.”

END_OF_DOCUMENT_TOKEN_TO_BE_REPLACED

HISD’s Chávez High School and Henry Middle School became two of the first local organizations to benefit from a new initiative recently, when they received grants for $15,000 and $5,000 from the City Connections program.

City Connections, a partnership between the City of Houston and the Center for Afterschool, Summer, and Expanded Learning (CASE) for Kids, is designed to help fight juvenile crime and promote child safety by providing much-needed funding for after-school programs. END_OF_DOCUMENT_TOKEN_TO_BE_REPLACED

Hundreds of students spent a part of their Saturday at Chávez High School’s STEM Symposium on Nov. 15.

Thirty education and STEM-industry professionals, including former astronaut Dr. Bonnie Dunbar and HISD Board of Education member Manuel Rodriguez, spoke about the importance of a STEM education and encouraged students to take classes related to science, technology, engineering, and math to prepare to enter a highly technical work force. END_OF_DOCUMENT_TOKEN_TO_BE_REPLACED

HISD will be observing SPARK (School Park) Week Nov. 17–21, 2014, with the opening of brand-new school parks at four different campuses, so come join district and community members as they celebrate the occasion with refreshments, entertainment, and lots of fun!

Below is a schedule of the opening ceremonies: END_OF_DOCUMENT_TOKEN_TO_BE_REPLACED

As part of HISD’s efforts to strengthen students’ skills in science, technology, engineering, and mathematics (STEM), more than 1,500 students are expected to explore future career options in those areas at two weekend events — the HISD STEM Symposium and the Education Rainbow Challenge.