HISD families are invited to join the Early Childhood Team in a fun-filled session of hands-on learning!

END_OF_DOCUMENT_TOKEN_TO_BE_REPLACED

Hispanic Heritage Month kicked off September 15 and runs through October 15.

District wide, Hispanic descendants are honored by having schools carry their namesake allowing their rich history to live on.

HISD has 22 schools that recognize the contributions of Hispanic civic and community leaders who range from educators and civil servants to local restaurateurs, newscasters, Congressional Medal of Honor recipients, and even Nobel Prize-winners.

We invite you to visit our blog each week throughout Hispanic Heritage Month as we will feature more schools who carry on these important legacies.

END_OF_DOCUMENT_TOKEN_TO_BE_REPLACED 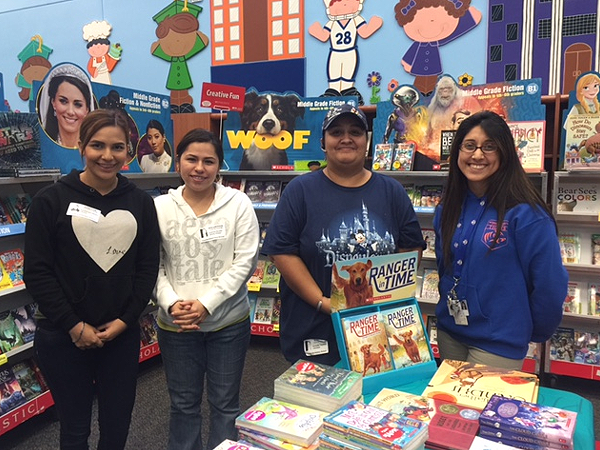 DeAnda ES parents (pictured) were able to purchase books at discounted prices from local retailers after obtaining library cards from the Houston Public Library, thanks to a special arrangement made by Principal Erwin Garcia Velazquez.

Now, four more campuses have been recognized by the Family and Community Engagement (FACE) Department for their efforts to make parents feel welcome and valued at their children’s schools.

END_OF_DOCUMENT_TOKEN_TO_BE_REPLACED

Hour of Code is a global initiative that calls for students to do at least one hour of coding during Computer Science Education Week, which runs from Dec. 7 to 13. Basically, coding is typing step-by-step commands into the computer that tell it what you want it to do. When coding, also known as programming, students will use language that computers understand to create computer games, applications, web content, and much more.

END_OF_DOCUMENT_TOKEN_TO_BE_REPLACED

At Burbank Middle School, students are creating videos about their future and life goals using Adobe Voice. At Herrera Elementary, students are using tablets and digital programs such as iMovie, Animoto, Prezi, and Roxio to produce digital book trailers instead of a standard book report. And at Austin High School, teachers are using the HUB, the district’s new online learning platform, to create online discussions and group activities.

Every day, students and teachers across the district are using digital tools and resources to transform teaching and learning inside their classrooms. Recently teachers and students from nearly 50 HISD campuses gathered in the lobby of the Hattie Mae White Educational Support Center to showcase their efforts at the district’s first ever Digital Learning Expo.

END_OF_DOCUMENT_TOKEN_TO_BE_REPLACED

During the month of February, all HISD teachers are being encouraged to try something new in their classrooms, as well as share ideas, resources, and lessons learned by posting their experiences and photos on social media using the hashtag #HISDdigital. Each week during the month, we are profiling a teacher or campus that is using technology to break up rows in classrooms, engage students, and innovate instructional practice. This week’s profile features Herrera Elementary.

Students at Herrera Elementary are using tablets and digital programs such as iMovie, Animoto, Prezi, and Roxio to produce digital book trailers instead of the standard book report most of us remembering doing in elementary school. END_OF_DOCUMENT_TOKEN_TO_BE_REPLACED

Students across HISD are giving back to those in need this holiday season in a variety of creative and inspiring ways. At Herrera Elementary, the school’s 3D design and print club produced toys using their 3D printer to give as holiday presents to children in their community. The toys were based on characters from animated movies and video games. Read more about that story here.

At Farias Early Childhood Center, Santa and his helpers — AKA HISD high school students —distributed toys to every prekindergarten child, thanks to a partnership with Leading Ladies, a nonprofit organization run by students from different high schools in Houston. Read more here.

During the month of December, students at Roosevelt Elementary joined the district’s effort to collect new toys for the Toys for Tots campaign. Approximately 140 new toys were collected and donated by students from that campus. See related story here.

And at Patterson Elementary, the school’s safety patrol joined forces with second grade students to deliver toys to patients at the Shriners Children’s Hospital in Galveston. Read more here.

Students in Herrera Elementary School’s 3D design and print club are designing 3D toys of animated characters from movies like “Frozen” and games such as Angry Birds as holiday presents for children in their community. END_OF_DOCUMENT_TOKEN_TO_BE_REPLACED