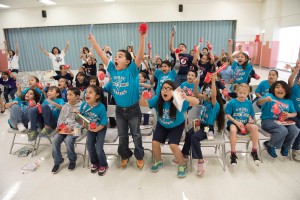 END_OF_DOCUMENT_TOKEN_TO_BE_REPLACED

The first day of school is right around the corner, but teachers are still busily preparing for its arrival, learning about the many new resources available to them and their students at the Personalized Learning Institute (PLI).

The annual event, which concludes this week, provides content-specific training to teachers at each grade level in advance of the new school year. The 2014 Institute also featured an overview of the district’s Literacy By 3 initiative, a new approach to reading instruction. END_OF_DOCUMENT_TOKEN_TO_BE_REPLACED Fourth-grader Alicia Sierra was recognized for her outstanding behavior. “I feel good and want to encourage my other friends so they can sit on stage with me,” she said. END_OF_DOCUMENT_TOKEN_TO_BE_REPLACED