Members of HISD PD C.O.R.E., Community Partnerships, and Student Enrollment collaborated with Nickelodeon for a special friendship—or fin-ship—initiative the week of April 18-22.

END_OF_DOCUMENT_TOKEN_TO_BE_REPLACED

The Council of the Great City Schools (CGCS) and the International Association of Chiefs of Police (IACP) have partnered to launch a task force centered on identifying models for collaboration between local police and urban school districts to address the safety of students in urban areas throughout the U.S.

END_OF_DOCUMENT_TOKEN_TO_BE_REPLACED

Fifteen uniformed men and women gathered with friends and family Wednesday at the High School for Law and Justice to be sworn in as the district’s newest law enforcement officers.

The audience cheered after each officer had a shiny silver badge affixed to their uniform by a family member or friend. The new officers walked across the stage proudly, pausing to shake their colleagues’ hands and accept congratulations.

“Before stepping foot on a school campus, please remember that some of our students deal with challenges beyond what you can imagine,” HISD Police Chief Paul Cordova said, offering the officers a few words of advice just before they were officially sworn in. “Remember to have a warm smile and a bit of compassion.”

END_OF_DOCUMENT_TOKEN_TO_BE_REPLACED

Most people don’t know that some of the most active members of the HISD Police Department are younger than 6 years old, furry, and do their part to keep the district safe.

The K-9 unit is a vital part of HISD’s Police Department, with all police dogs trained to support and protect officers. The K-9s also conduct area searches for drugs, weapons, or other contraband that may be on school grounds or in district facilities.

“The K-9 unit has been around since the ‘90s,” HISD Police Sergeant Tridung Tran said. “We started with two and now we’ve expanded to five K-9s. They allow us to provide a better service to the district.”

END_OF_DOCUMENT_TOKEN_TO_BE_REPLACED

This week, law enforcement officers in HISD and across the country will be celebrated for their service and sacrifice as part of Law Enforcement Appreciation Week.

The annual observance was created in 1962 when President John F. Kennedy signed a proclamation designating May 15 as Peace Officers Memorial Day, and the week in which the date falls as Law Enforcement Appreciation Week.

“Every year we use this time to reflect on the value of peace officers to our society and the immense sacrifices they make on a daily basis to protect the community,” HISD Police Chief Paul Cordova said. “During this week we want to honor both the living and the dead who have dedicated their lives to serve others.”

END_OF_DOCUMENT_TOKEN_TO_BE_REPLACED

The newest four-legged addition to the HISD Police Department arrived last week, wagging her tail to show her excitement.

Officer Boni is a German Shepherd with a Hungarian bloodline. For the next month, she will undergo additional training including obedience, stamina, endurance, and narcotics detection.

“Boni will demonstrate the role and duties of our K-9 team for the public,” HISD Sgt. Tridung Tran said. “We want to build long-lasting relationships with the communities we serve, and our K-9 officers are the perfect ice breaker.” END_OF_DOCUMENT_TOKEN_TO_BE_REPLACED

The Houston Independent School District Police Department hosted a ceremony Wednesday to recognize the promotions of six new sergeants and to swear in seven new officers.

The celebration, which was held at the High School for Law and Justice for the officers and their families, honored the new sergeants, who were officially sworn into their roles last month, as well as the new officers, who were sworn in at the event.

“This is more than a swearing in,” Police Chief Paul Cordova said. “This is a public commitment to the principles of law enforcement, and it’s our officers reinforcing their commitment to serving the community.”

HISD Interim Superintendent Grenita Lathan expressed her appreciation to the department and the new officers for their work in keeping HISD schools safe. END_OF_DOCUMENT_TOKEN_TO_BE_REPLACED

The Houston Independent School District Police Department opened a new police substation in northeast Houston to better support the schools and communities in that area.

Located in the former Chatham Elementary School on Bertwood Street, the northeast substation will serve the north, east, and central sides of town.

The new location was established as part of the police department’s safety and security initiatives for the 2018-2019 school year.

END_OF_DOCUMENT_TOKEN_TO_BE_REPLACED 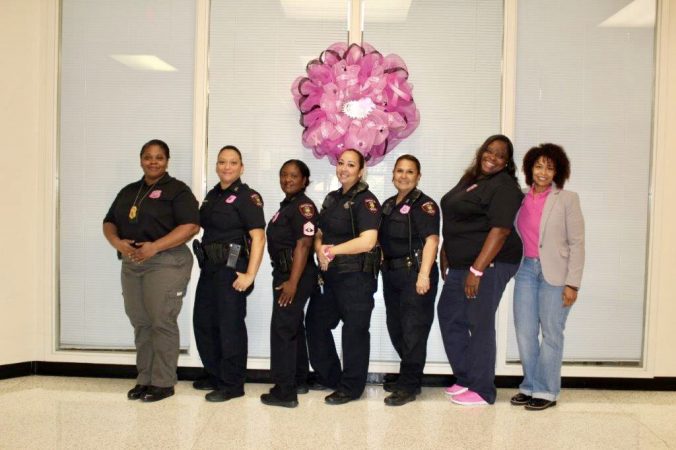 In honor of Breast Cancer Awareness Month, many HISD police officers are sporting pink police badges this month to help raise awareness about the disease and raise funding for research.

Officers who contributed $20 or more are wearing special pink badges throughout the month, signifying their commitment to the cause. The money raised will go to the American Cancer Society to support patients and their families fighting breast cancer.

“The Pink Badge Program is a great way for our officers to show support for our community,” Assistant Police Chief Lucretia Rogers said. “I think it demonstrates our commitment to supporting families who are struggling with this serious disease.”

The Pink Badge program is supported by various law enforcement agencies across the country. This is the second year HISD’s police department has participated.

The new graphics showcase a black vehicle shell with white front and rear doors displaying reflective images of the HISD Police badge and department name. The vehicle number is located at the back, along with a reflective emergency bar.

“These new graphics avoid any confusion,” HISD Police Sgt. Quinten Flannel said. “We decided that we wanted to be part of these efforts and made the move to that direction for safety above all.”