Students are remaining on campus throughout construction. Significant behind-the-scenes work has been ongoing in the past year including the upgrading of the campus main electrical service feed, replacement of electrical panels and transformers in several areas along with needed demolition work.

Installation of a new curtainwall system and windows and upgrades of athletics offices and locker rooms were the main focus in the third and fourth quarters. Replacement of the fire alarm, HVAC and electrical systems are ongoing. Band hall and JROTC renovations are now underway. Some renovated classrooms were made ready for move-in over winter break.

New fire sprinkler system pipe is being installed above the ceiling in the dining area.

Newly renovated CTE Health classrooms, science labs and other classroom areas including Extended Learning rooms in the three-story academic wing are being completed and HISD movers are setting these new rooms up for teachers’ and students’ use next week for school.

Renovation of the new Art Room lab is progressing.

Renovation to several existing restrooms in the three-story academic wing is nearly complete.

Renovation and build-out of the Boy’s Athletic Locker Room area wall stud framing is nearly complete and electrical work is under way.

The new Band Addition foundation is progressing and structural steel is on site, erection of steel columns and beams has begun.

As each area is complete and operable it is turned over to campus personnel for use. The project has a target completion date of third quarter 2016.

The festival gives bands the opportunity to receive feedback on their music quality, sections, music effects, visual effects, and visual performance. The critiques will help the bands prepare for future performances and events.

The students, who attend Austin, Chávez, Davis, Furr, Kashmere, Liberty, Lee, Sam Houston, Sharpstown, and Waltrip high schools, got a taste of what careers in a STEM-related field could be like. END_OF_DOCUMENT_TOKEN_TO_BE_REPLACED

Waltrip High School’s Roarin’ Red Band made the trip to the nation’s capital and played in the National Independence Day Parade.

The band was invited to perform by U.S. Rep. Sheila Jackson Lee, and it was the only band in the state selected. END_OF_DOCUMENT_TOKEN_TO_BE_REPLACED 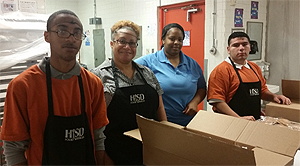 Through HISD’s Community Based Vocational Instruction (CBVI) program, high-school students can go into local businesses for a couple hours a day, a few of times a week, to develop their workplace skills through on-the-job training.

For the first time this year, HISD’s Nutrition Services department is one of the partnering organizations, and it is working with two or three students from each of five high schools: Lee, Madison, Scarborough, Sharpstown, and Waltrip. Participating students learn about the food service industry by working in school cafeterias, performing tasks such as washing dishes or serving fruit.

END_OF_DOCUMENT_TOKEN_TO_BE_REPLACED

Winner to be announced May 15 at Celebration of Excellence

New this year at the HISD Celebration of Excellence is the Fan Favorite award. Over the past week, HISD staff, students, and alumni have been voting for their favorite campus-based Teacher of the Year, as designated by schools across the district. More than 25,000 votes were submitted and tallied—and the top two elementary, middle, and high school teachers are moving on to round two of voting. The top six finalists are:

END_OF_DOCUMENT_TOKEN_TO_BE_REPLACED

Two HISD employees were recognized recently for their contributions to the education of Heights-area children.

Shakiri Hooper, a clerk at Garden Oaks Montessori, has been named the Paraprofessional of the Year, while Joyce Rogers, an instructional specialist at Waltrip High School, was named the Educator of the Year by the Greater Heights Area Chamber of Commerce.

Nominees were judged by a committee on the basis of their experience and evidence of leadership, service, and dedication to making a difference in students’ lives.

“Ms. Hooper is extremely hard-working and goal-oriented,” wrote Garden Oaks Principal Lindsey Pollock. “She is a team player who seeks win-win solutions even when faced with seemingly insurmountable odds.”

“Joyce has served as a role model not only for staff, but also for students,” said former Waltrip High School Principal Andria Schur. “She takes a personal interest in motivating people to be their personal best, while also challenging them to serve as models and motivators to those around them.”

Both women will be formally recognized during the organization’s annual education luncheon on May 18.

The top six Junior Reserve Officer Training Corps (JROTC) cadets, who were named earlier this month, were honored on April 25 at the Annual HISD JROTC Final Review and Awards Ceremony.

All were promoted to the rank of Cadet Colonel (Army) or Cadet Captain (Navy), which are the highest ranks in the program. The top seniors were chosen from among all the graduating seniors in HISD’s 25 JROTC programs.

END_OF_DOCUMENT_TOKEN_TO_BE_REPLACED

Trumpeter Esmeralda Sandoval (Waltrip HS) and baritone saxophonist Grace Estrada (Westside HS), as well as five students from Bellaire High School and 20 from the High School for the Performing and Visual Arts, will perform in various groups during the TMEA’s annual convention in February.

All-State is the highest honor a Texas music student can receive. Approximately 1,750 students were selected through a process that began with more than 64,000 students from around the state vying for the honor to perform in one of 15 ensembles (bands, orchestras, and choirs).

Last year marked the first time a Westside student had ever been selected, and the same student (Grace Estrada, now a senior) is returning this year. You can read more about her achievement in this school-based newsletter.