Lilly Rincon has been selected as the new principal of Scarborough High School. Rincon began her 22-year career as an educator in the McAllen Independent School District. Returning back home to Houston after two years of teaching in South Texas, she served as a classroom teacher at Burbank Elementary and Travis Elementary within Houston ISD. During this time, she was recognized as Bilingual Teacher of the Year and selected as a candidate for the Houston ISD Turnaround Leadership Cohort. Rincon joined the Jefferson Elementary team in 2013 and has served as a Teacher Specialist, Assistant Principal, and Principal. During her tenure, Jefferson has attained an 89 TEA rating with 3 distinctions and has been awarded Butterfly Effect by the Neuhaus Education Center for the inspiring work in literacy.

END_OF_DOCUMENT_TOKEN_TO_BE_REPLACED

As the school band played a selection of rhythm and blues, students, faculty, staff, community members, and visitors gathered Thursday on the school’s front lawn to celebrate official completion of the $14.6 million construction and renovation project.

END_OF_DOCUMENT_TOKEN_TO_BE_REPLACED

Scarborough High School senior Melanie Esquivel remembers all too well how often the school band has been shuffled around over the last few years.

They practiced first in the dance hall and then in the gym, but the acoustics amped up their sound so much teachers in nearby classrooms often complained. So they moved into the cramped black box theater, where they made do.

“I almost cried when I saw it. It’s just so emotional. I’ve been waiting so long for it,” the 17-year-old flutist said, hardly able to contain her excitement as she pointed out features of the school’s new band hall. “We’re finally like a big part of the school.”

END_OF_DOCUMENT_TOKEN_TO_BE_REPLACED

Three Houston Independent School District high schools and one elementary school will open their doors and welcome students in to new facilities when they return from winter break on Jan. 8.

Sharpstown was rebuilt and Scarborough was renovated as part of the district’s voter-approved 2012 Bond Program. The construction of the new North Forest High School and renovation of storm-damaged Robinson Elementary School were overseen by the bond team, but not funded with bond dollars. END_OF_DOCUMENT_TOKEN_TO_BE_REPLACED

Construction at Scarborough High School is over halfway complete with renovations to classroom spaces and common areas finished in time for students to enjoy on the first day of school on Sept. 11.

The remaining portion of the project — a 13,000-square-foot JROTC and fine arts building addition — is nearly complete with roofing underway and brick installation set to begin in the coming weeks.

“Although our construction timeline is slightly delayed, the crew has us back on track,” Scarborough Principal Rod Treviño said, referring to initial delays in the wake of Hurricane Harvey. “Our classrooms and hallways look great, and students are excited about the look of their new 21st century building.”

END_OF_DOCUMENT_TOKEN_TO_BE_REPLACED 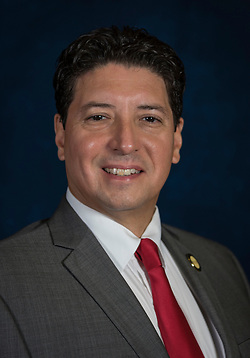 Rod Treviño has been appointed principal of Scarborough High School. Treviño has served as a public school educator for more than 19 years, beginning his career at Johnston High School in Austin ISD, where he taught English and served as chairman of the English Department and assistant principal. Most recently, he was principal of Dahlstrom Middle School in Hays Consolidated ISD. Treviño is a native Texan and received his undergraduate degree in English from University of Texas at Austin and his master’s degree in educational leadership from Texas State University. Most recently, he completed work as a member of the leadership cohort at Harvard University with a specialization in family and community engagement.

Standing before a packed auditorium, Scarborough High School Principal Diego Linares thanked the school community for passing the district’s 2012 Bond Program — a move that he said began the renewal of the 50-year-old campus.

The school is making great progress, Linares said, noting that students are meeting state standards and the campus boasts of having the most Futures Academy graduates in HISD. The renovation work underway will simply serve to strengthen and complement the campus.

“We are the school that builds upon the strengths of its students, rather than focus on their deficits. We are a school that views failure as a temporary rather than permanent state,” Linares said. “Now, we can say we’re the school that’s on the verge of providing the most functional building to meet the student’s needs.”

END_OF_DOCUMENT_TOKEN_TO_BE_REPLACED

It’s fall in Houston, and with the season comes football and tailgate parties. HISD’s Nutrition Services department is hosting lunch-time tailgate parties every Thursday at several HISD high schools. Jones Futures Academy and Scarborough High School were the first two schools to win an all-out tailgate party where students can enjoy a meal and socialize outside the cafeteria.

END_OF_DOCUMENT_TOKEN_TO_BE_REPLACED

Houston Mayor Sylvester Turner was among 125 people who turned out Sunday for a banquet in honor of the Scarborough High School band.

The event marked the culmination of a year spent building the school’s fledgling band program, increasing from nine students at the start of the year to 40, all of whom received awards on Sunday.

Mayor Turner congratulated the students on their achievements, and encouraged them to continue to work hard in pursuit of their dreams. He even said he’d work with the principal to have the band perform at next year’s Super Bowl in Houston.