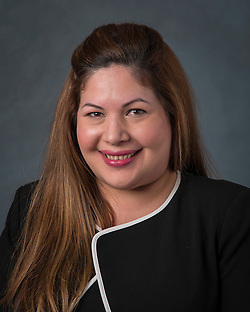 Mayra Ramon has been selected as the new principal at Crespo Elementary School. Ramon previously was the principal at Sanchez Elementary School, where she dedicated the last eight years in a leadership role as assistant principal since 2009 and as principal in 2013, She has been a member of the HISD team since 2000. Under her leadership, Sanchez Elementary School has been named a two-time bronze and silver national award winner from the National Center of Urban School Transformation, earned a Houston Top Gold Ribbon from the Children at Risk Organization, and has consistently received Distinctions from the Texas Education Agency. Ramon graduated cum laude from the University of Texas–Pan American with a Bachelor of Interdisciplinary Studies with a minor in Bilingual/Bicultural studies, earned a Master of Education in Administration and Supervision from the University of Phoenix, and has completed courses toward a master’s in Counseling from Sam Houston State University.

The Houston Symphony School Residency at Crespo Elementary presented by BBVA Compass, in its pilot phase during the 2015-16 school year, will be structured around lessons, instrument demonstrations and performances. END_OF_DOCUMENT_TOKEN_TO_BE_REPLACED 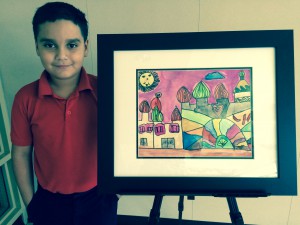 The lobby of Spring Hill Suites by Marriott will be transformed into an art gallery from 4 to 7 p.m. on Thursday, Dec. 4, thanks to the creativity of 30 Crespo Elementary School students.The event will help raise public awareness of HISD’s outstanding magnet programs, and Crespo is honored to represent the fine arts programs in particular.

END_OF_DOCUMENT_TOKEN_TO_BE_REPLACED

Last year, HISD’s Nutrition Services department launched a pilot program at a handful of campuses to increase the selection of fresh fruits and vegetables available to students in the cafeteria at lunch.

That program was so successful that the district has expanded it this year, and a total of 26 HISD schools now regularly offer a fresh fruit and vegetable bar. END_OF_DOCUMENT_TOKEN_TO_BE_REPLACED

For the next eight months, employees and visitors who come to the Hattie Mae White Educational Support Center cafeteria for lunch can stay for a side order of entertainment!

END_OF_DOCUMENT_TOKEN_TO_BE_REPLACED

“It’s good to see that our students have so many opportunities at HISD,” said Rubin and Laura Precella, who attended the program with their daughter and nephew, both eighth-graders at The Rice School. “We just want to learn more about the different programs so that we can choose one that will help our children make their mark on the world.” END_OF_DOCUMENT_TOKEN_TO_BE_REPLACED

HISD held its third annual Celebration of Excellence at the Hilton Americas Hotel on May 1, 2014, to honor the many dedicated professionals who contribute to the success of Houston’s students on a daily basis.

Among those recognized at the event were the district’s Elementary and Secondary Teachers of the Year, who were revealed for the first time that evening.

END_OF_DOCUMENT_TOKEN_TO_BE_REPLACED

Former Houston Rockets stars Clyde Drexler, who is a Sterling HS alum, and Elvin Hayes, along with former players John Lucas, Felipe Lopez and T.J. Ford, visited classes and talked to students about working hard on their studies and staying in school.

END_OF_DOCUMENT_TOKEN_TO_BE_REPLACED

Every year since 1996, fourth- and fifth-graders from two dozen HISD schools have competed in this annual contest, which challenges students to write and present a short original speech on a subject related to the slain civil rights leader. The topic this year is, “If Dr. King were speaking at a March on Washington today, what would he say?”

END_OF_DOCUMENT_TOKEN_TO_BE_REPLACED

These 20 magnet school programs enroll a combined 758 students from outside their attendance zones.
END_OF_DOCUMENT_TOKEN_TO_BE_REPLACED