Dianna Balderas has been named the new principal of Scroggins Elementary School. For the last 4 ½ years, Balderas has served as the assistant principal at Travis Elementary School. Before entering administration, she was a bilingual teacher and reading interventionist at Garcia, Travis, and De Zavala elementary schools. Balderas is a native Houstonian and product of HISD, graduating from DeBakey High School. She earned a Bachelor of Business Administration with a minor in Spanish from the University of Houston and a Master of Educational Administration from Lamar University. Balderas also completed the 2017 cohort of HISD’s Principal Candidate Development Opportunity (PCDO).

Fifth-grade artists were encouraged to showcase their talents with the department’s K-9 unit as the theme. Participants also explored other themes, including the importance of law enforcement and the different types of police officers.

END_OF_DOCUMENT_TOKEN_TO_BE_REPLACED

Scroggins librarian Jo-Anne Reed won a $1,500 grant from that organization for the school, which she used to stage a feline-themed celebration that plays off the quinceañera, a traditional celebration for Hispanic 15-year-old girls marking their transition into adulthood.

END_OF_DOCUMENT_TOKEN_TO_BE_REPLACED

The winners of HISD’s annual 2015 Holiday Greeting Card competition were announced on Nov. 3, and one was a repeat from last year.

Gloria Xie, who won in the middle school category in 2014, also claimed that honor this year as a seventh-grader at Pershing Middle School. “I would just like to say thank you to my principal, Ms. (Kim) Heckman, and my teacher, Ms. Perugini, and my parents,” she said.

Each year, the district sends out hundreds of holiday greeting cards to principals, board members, legislators, local leaders, parents groups, and community partners. Since 2003, these cards have featured the artwork of HISD students.

The other students whose artwork was selected for 2015 were: END_OF_DOCUMENT_TOKEN_TO_BE_REPLACED

Every year, HISD elementary and middle school students participate in the Dental Health Poster Contest, which promotes the American Dental Association’s National Children’s Dental Health Month campaign. The purpose is to convince children and adults of the importance of good oral health.

END_OF_DOCUMENT_TOKEN_TO_BE_REPLACED

Designs are also available for purchase by the general public through Friday, Dec. 5

Each winter, HISD sends out holiday greeting cards to hundreds of people and organizations, including school principals, board members, legislators, local leaders, parent groups, and community partners. Since 2003, these cards have featured the artwork of district students, and this year, three designs were chosen to showcase their creative talents.

END_OF_DOCUMENT_TOKEN_TO_BE_REPLACED

HISD librarians are participating in a new twist on the usual computer codefest this Saturday, from 12-7 p.m. when they take part in a “literacy hackathon” at the Houston Public Library.

At least six librarians, representing Lovett ES, Colter ES, Bonner ES, Scroggins ES, Johnston Middle School and the Mandarin Chinese Language Immersion School, have signed up to participate in Literacy Hack – a free, collaborative event where designers, writers, educators, software developers and other citizens work together on projects to help the literacy community. The event is sponsored by the Houston Center for Literacy.
END_OF_DOCUMENT_TOKEN_TO_BE_REPLACED 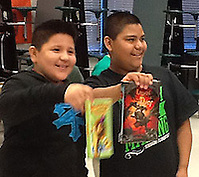 Jason Castro is usually knowing for his catching prowess on the baseball diamond, but on May 29, he was delivering a pitch.

The professional athlete was at Scroggins Elementary School last Thursday to persuade young learners to continue reading for pleasure over the summer months, and to improve their chances of doing that, he helped distribute some of the 7,200 books he and his wife had donated to two HISD campuses. The books were divided between Scroggins and MacGregor elementary schools, and students at each campus got to select up to five books to take home and keep.

A hundred lucky families also got to attend the Houston Astros’ evening game against the Baltimore Orioles. The donation was coordinated through the literacy foundation the couple started, called Castro’s Kids.