In observation of Earth Month, HISD’s Energy and Sustainability Department held a contest intended to inspire creativity and environmental awareness by repurposing recyclable materials into art pieces. The department’s hope was that the contest would excite students and encourage a more active engagement with the environment and conservation both at school and at home.

END_OF_DOCUMENT_TOKEN_TO_BE_REPLACED 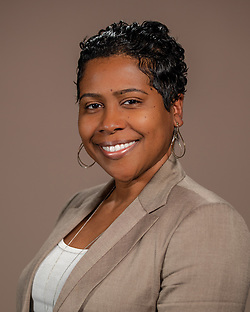 Rhonda Honore has been selected as the new principal of Frank Black Middle School. Honore began her 20-year career with HISD as a fifth-grade Science teacher at Burbank Elementary School, where she received Teacher of the Year and HAABSE Teacher of the Year awards. During her 20-year tenure in the district, Honore also has served as a math and science content specialist, teacher development specialist, and Rice Model Lab teacher. She most recently served as principal at Reynolds Elementary School. She received her bachelor’s degree in Interdisciplinary Studies from the University of Houston, a master’s degree in Curriculum and Instruction from Prairie View A&M University, and an MBA with an Educational Leadership focus from the University of Saint Thomas.

The Orange Show’s 29th annual Art Car Parade will be rolling through downtown Houston on Saturday, April 9, and almost a dozen of the mobile artworks on display will be the work of HISD students.

END_OF_DOCUMENT_TOKEN_TO_BE_REPLACED

Five different HISD schools were recently named “Champions off the Field” by the Souper Bowl of Caring for their efforts to fight hunger.

This annual food drive and fundraiser, which ran from Jan. 20 – Feb. 7, generated more than $9.9 million in donations nationally this year, a portion of which came from the 33 HISD schools that participated.

END_OF_DOCUMENT_TOKEN_TO_BE_REPLACED

Winner to be announced May 15 at Celebration of Excellence

New this year at the HISD Celebration of Excellence is the Fan Favorite award. Over the past week, HISD staff, students, and alumni have been voting for their favorite campus-based Teacher of the Year, as designated by schools across the district. More than 25,000 votes were submitted and tallied—and the top two elementary, middle, and high school teachers are moving on to round two of voting. The top six finalists are:

END_OF_DOCUMENT_TOKEN_TO_BE_REPLACED 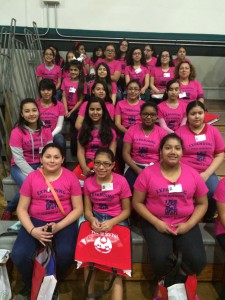 Students from Burbank MS had a blast at the Expanding Your Horizons conference.

Female professionals talked to students from Black, Burbank, Grady, Henry and Revere middle schools, and the Baylor College of Medicine Academy about a variety of STEM careers. The students worked with a 3-D printer, learned about storing DNA, created cement, and developed butterfly gardens.

The West Harris County Branch of the American Association of University Women hosted the conference. 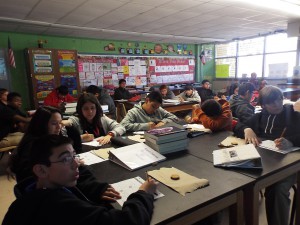 In the Vanguard magnet program at Black Middle School, students are taking advanced courses such as biology, geometry, and creative writing. They’re working on their own experiments, researching history on a local and national scale, and even writing their first novels.

“Our students are taking high-school level courses in the seventh and eighth grades,” said Katelyn Riley, the school’s Vanguard coordinator. “Our sixth-graders are learning seventh-grade math, and we have students taking geometry and biology as eighth-graders.” END_OF_DOCUMENT_TOKEN_TO_BE_REPLACED

Here are the individual results: END_OF_DOCUMENT_TOKEN_TO_BE_REPLACED

Everyone’s a winner just for competing in the HISD K-2 “Name That Book” contest, which was held March 3-7 at MC Williams Middle School. There were 10 winners — two winners on each of the five days — out of almost 80 participating elementary schools: Askew, Bell, Briargrove, Condit, Lockhart, Lovett, Mandarin Chinese, Valley West, West University, and Wharton Dual Language elementary schools. Each school can enter only one team. Students received medals and certificates for competing.

END_OF_DOCUMENT_TOKEN_TO_BE_REPLACED

Who: The April 2012 edition of HISD Up Close hosted by HISD Board of Education President Michael Lunceford features an interview with fellow board Trustee Rhonda Skillern-Jones about community efforts in District II to revitalize Frank Black Middle School.  The show also gives viewers a tour of the Bellfort Early Childhood Center, a successful school renovation project completed as a result of the $805 million bond referendum approved by Houston voters in 2007, and a look at how state and federal budget cuts are affecting the development of HISD’s 2012-2013 school year budget.

When: Throughout the month of April at www.houstonisd.org and on HISD-TV (Comcast channel 18 and AT&T U-verse channel 99) on Wednesdays, Fridays and Sundays at 8:30 p.m.

Why: HISD Board President Michael Lunceford is committed to showcasing some of the amazing things happening at HISD schools across the district, in addition to highlighting district initiatives and accomplishments. His monthly show will regularly feature a tour of a bond construction school, an interview with one of his colleagues on the HISD Board of Education, and a segment showcasing the academic accomplishments of HISD students and the dedication of HISD staff.